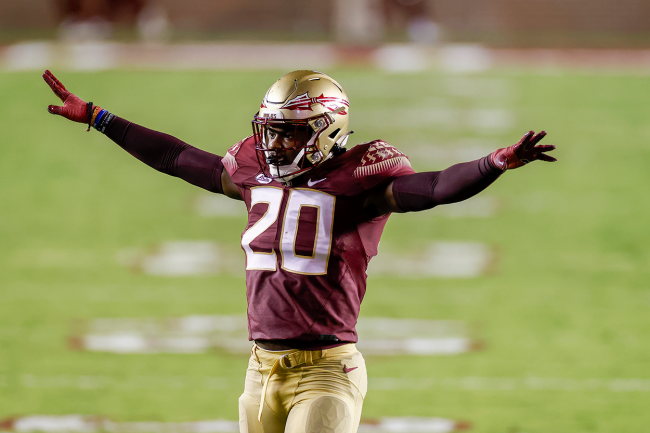 Florida State football is looking to go above .500 for the first time since 2017. The odds are not in their favor after a recent TikTok video.

Earlier this week, redshirt sophomore quarterback Gino English posted a video to his 23,000+ followers of him and his teammates in the locker room. They are gathered together for a dance party that directly correlates to a viral trend set to a remix of Dua Lipa’s ‘One Kiss.’ The trend goes kinda hard.

The Seminoles’ attempt at the trend? Well, “kinda hard” would not be the proper description.

It is just a bunch of college kids having fun, and it is fun! But there is an undeniable cringeworthy element to the video, take a look:

Last year, prior to Florida State’s season-opener against Notre Dame, a three-star (who ultimately committed to Notre Dame) posted a TikTok in a Seminoles uniform. The caption read: “if fsu loses today this is the reason.”

if fsu loses today this is the reason #fsu #fyp

In that year, the Seminoles were very, very good. They entered the year ranked No. 1 and proceeded to release the ‘Seminole Rap,’ and it was super cool. There is simply no denying how awesome it was.

However, once again, it did not bode well for them. In the rap, Florida State called out its opponents by name.

When the team took the field against Miami in Week 1, it lost 31-0. They didn’t lose another game all season, but the singular loss took them out of national championship contention.

Based on history, English’s Dua Lipa TikTok means that LSU is going to beat them up and down the field come September. But who knows, maybe this is the video to break the streak?