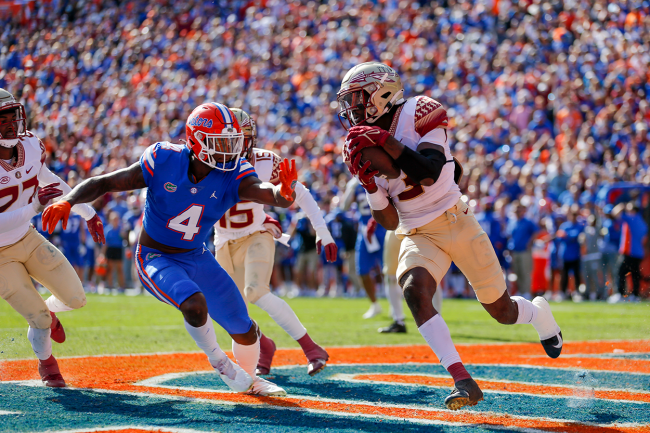 When the NCAA introduced interim rules on Name, Image and Likeness last summer, it changed the landscape of college athletics forever. On the surface, it became the first time that players could profit off of their being while actively participating in NCAA-sanctioned events.

But it goes deeper than that. Especially within college football.

Over the last eight months, NIL has caused an arms race across the country. With players being able to accept payment, their recruitment includes an above-ground financial aspect and players on campus already are looking for the best opportunity to profit.

As a result, programs and their boosters are trying to raise as much money as possible. In a lot of ways, as Nick Saban Lane Kiffin, and other college coaches have said, it has become something of free agency.

Schools with larger alumni bases and deeper pockets can pay more for players, no matter what narrative Jimbo Fisher tries to spin. It is not a direct pay-for-play scenario, but certainly as close as it can get without breaking NCAA rules.

Now, in Tallahassee, there is a new development.

Florida State football is said to be dealing with a pay-for-play-adjacent scenario with one of its top cornerbacks. The Seminoles opened spring practice over the weekend and will continue through the Spring Game on April 9th, but will reportedly be without Jarvis Brownlee for the foreseeable future.

As of right now, Brownlee is believe to be holding out.

According to Ingram Smith of The Nolecast, the No. 1 FSU football podcast in the nation, it is because Brownlee is frustrated with a current NIL issue. Despite rumors of Brownlee lacking a deal all together, he says that, as he understands it, Brownlee has a deal in place but is currently ineligible.

From what I have heard Brownlee did not meet the min requirement of the agreement and as such compensation has either been delayed or will not be occurring.

Josh Newberg of Noles247, the Seminoles-focused affiliate site for 247 Sports, also alluded to the holdout.

“TJ fire up the Spaces, we got a DB holding out of spring practice” pic.twitter.com/5eNAnH6F6Z

The belief is that Brownlee, a starter for Florida State last season and four-star recruit out of high school, will not be suiting up this spring until that is sorted out. On the day that spring practice began, Brownlee posted a cryptic tweet about how “God got him.”

He followed it up with another vague tweet on Tuesday.

And then, on Wednesday, he responded to Smith’s report saying that all he knows is football.

It is unclear as to what Brownlee’s tweets mean or if they have anything to do with the NIL situation. However, if he is truly choosing not to practice because of the snafu with his NIL deal, then he is believed to be the first college football player to do so.

The NIL era is unlike anything college football has seen before. This is wild.