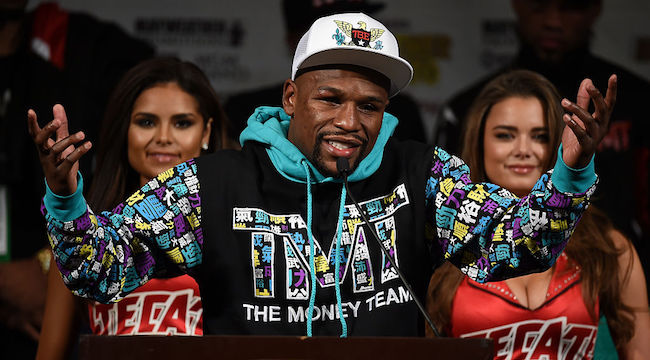 After earning over $100 million dollars fight Conor McGregor earlier this year itt seems like Floyd Mayweather Jr. has a lot of money to burn. Earlier today, future NBA hall-of-famer Kobe Bryant posted a video on Instagram, showing parts of how the animation version of his “Dear Basketball” letter that was shown during his retirement ceremony was made. That’s when the 40-year-old 5^8 boxer went full LaVar Ball and decided to randomly challenge the former Lakers great to a game of one-on-one for a million dollars on Instagram.

All anyone has to do is refer to Kobe vs Bow Wow… pretty much the same game!

It’s no secret that Floyd Mayweather loves to play basketball. The day after beating Conor McGregor in the boxing ring, Floyd showed up to a charity basketball game and balled out.

I’m not completely sure how serious Mayweather was about the challenge, but Kobe would definitely wipe the floor with the retired boxer on the basketball court. Floyd would probably not even be able to score a single point against the man they once called the Black Mamba. Kobe has yet to respond to Mayweather’s challenge but it’s pretty clear that a game of one-on-one basketball between Mayweather and Kobe would be much worse than Conor McGregor attempting to box Floyd Mayweather.
.