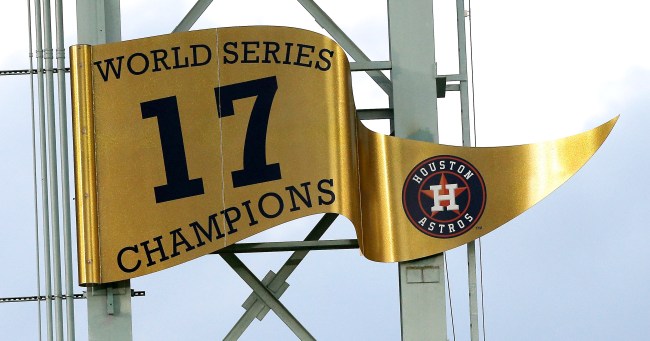 The Houston Astros organization, as successful as it has been of late, just can’t seem to get out of its own way and stay out of trouble.

In 2016, the franchise had to apologize for one of their minor leaguer’s sexist Twitter comments.

In October of this year, the team fired assistant general manager Brandon Taubman after initially denying a report that he loudly mocked three female journalists in the team’s clubhouse about the signing of closer Roberto Osuna who had been accused of domestic violence.

And now, less than a month removed from the team’s second World Series appearance in three years, four former Astros are claiming that the team stole signs electronically in home games during the team’s one and only World Series-winning season in 2017.

In a new bombshell report by Ken Rosenthal and Evan Drellich of The Athletic, these four people who were formerly with the Astros, including pitcher Mike Fiers, claim the team stole signs in 2017 in real time with a camera positioned in the outfield of Minute Maid Park.

This report would seem to confirm several accusations over the past few seasons that the Astros have been using sign-stealing tactics.

According to the four people, a video screen showing a feed from the camera was placed in the Astros’ dugout area and was used to view signs the opposing team’s catcher was giving during Houston’s at bats.

“That’s not playing the game the right way,” said Fiers, who was with the team from 2015-17 and was non-tendered in the offseason after the Astros won the 2017 World Series. “They were advanced and willing to go above and beyond to win.”

Three other sources who were inside the organization in 2017 and had direct knowledge of the scheme discussed its existence on the condition of anonymity.

The Astros’ set-up required technical video knowledge and required the direct aid of at least some on the baseball operations staff, team sources said.

“People respect what they’ve accomplished,” said one MLB general manager. “They don’t respect the culture they’ve created or some of the methods they choose to utilize to become what they’ve become.”

As for why he is speaking out now, Fiers said, “I just want the game to be cleaned up a little bit because there are guys who are losing their jobs because they’re going in there not knowing. Young guys getting hit around in the first couple of innings starting a game, and then they get sent down. It’s (B.S.) on that end. It’s ruining jobs for younger guys. The guys who know are more prepared. But most people don’t. That’s why I told my team. We had a lot of young guys with Detroit (in 2018) trying to make a name and establish themselves. I wanted to help them out and say, ‘Hey, this stuff really does go on. Just be prepared.’”

Former White Sox pitcher Danny Farquhar recalled one game just prior to the 2017 postseason where he believes he caught the Astros in the act banging on a trash can every time he was about to throw an off-speed pitch (heard in the video below) , and two of The Athletic’s sources claim the team continued to use the sign-stealing tactics during the 2017 post-season.

A previous report for The Athletic by Drellich revealed that many in Major League Baseball view the Astros organization as being a bit roguish at best and at worst, toxic.

“Toxic. Eats you alive,” said one of current and former Astros employees The Athletic spoke to about the organization’s culture. “Cutthroat. Secretive. Not fun. But, winning, being first, innovative.”

Major League Baseball is expected to meet at some point with the fired Taubman to discuss the culture of the Astros franchise.

UPDATE: The Astros have released a statement on the matter.

Read the entire report, which includes more damning evidence regarding the Astros’ alleged sign-stealing, at TheAthletic.com.