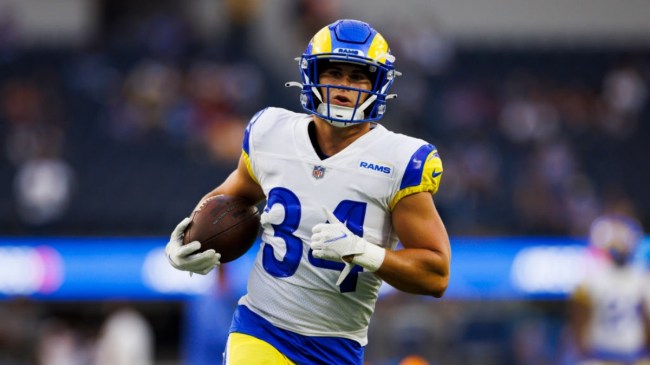 After not seeing much action in over a year with the Los Angeles Rams, Jake Funk has had a very eventful week.

The Rams’ running back room recently became crowded when they brought Malcolm Brown back after a couple of seasons away from the team. This week, the Rams decided to make things less crowded at the position and waived Funk.

However, it didn’t take long for him to land on his feet. After clearing waivers a couple of days ago, Funk signed to the New Orleans Saints’ practice squad.

Following the news, Funk’s girlfriend, Hannah Ann Sluss, retweeted a post congratulating Funk on his move to the Saints.

Wishing you all the best in New Orleans, @jakefunk34. 🫡 pic.twitter.com/33MkkZ3wSG

Hannah Ann was a contestant on Season 24 of The Bachelor, which was Pete Weber’s season of the show. She seemingly won the show, receiving Weber’s final rose and getting engaged to him on the show’s finale. He later revealed that he was still in love with another contestant and called off his engagement to Hannah Ann. That relationship didn’t work out for him either.

Now Hannah Ann has moved on to the new Saints running back.

He’ll have a tough time working his way into a meaningful role with the team as they already have Alvin Kamara dominating snaps at running back and have Mark Ingram and Dwayne Washington serving as his backups.

With that much competition already ahead of him for the Saints, it could be tough for Funk, who has 2 carry careers in the NFL, to supplant Hannah Ann Sluss as the most famous person in the relationship.