The Entire Fox Sports “Big Noon Kickoff” Crew Is Out Saturday Due To COVID-19 Protocol, NFL Hosts To Fill In 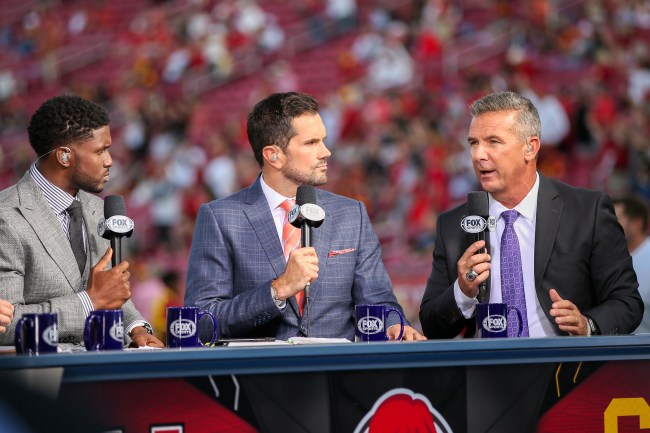 Rob Stone, Matt Leinart, Brady Quinn, Reggie Bush and Urban Meyer will not host Saturday’s “Big Noon Kickoff” on Fox this weekend due to COVID-19 protocol, per the New York Post. Originally scheduled to air before this weekend’s first Pac 12 matchup of the season, the show will call on a high-profile group of Fox talent to continue the broadcast in their place.

The show will air prior to Saturday’s game between No. 20 Southern California and Arizona State with a replacement crew of Terry Bradshaw, Howie Long, Emmanuel Acho and Charissa Thompson. Thompson, Long and Bradshaw are key components to the network’s Fox NFL Sunday program, while Acho is a prominent college football voice in his own right and co-hosts the network’s “Speak For Yourself” alongside Marcellus Wiley. In a statement that was originally released to The Post, Fox Sports said it was holding the crew out of the broadcast “out of an abundance of caution” and with recommendations from the CDC and the Los Angeles Department of Public Health’s safety guidelines.

Fox would not comment on whether one of the five analysts had tested positive for the virus, but logical deduction would conclude that one, if not more than one, has/have tested positive or come in extremely close conduct with someone who has. Fox’s Big Noon Kickoff was not expected to compete with ESPN’s College Gameday pregame show in its first year, but the numbers from 2019 exceeded expectations and brought high hopes into 2020.

The backup crew may be different, but it will surely provide a large amount of entertainment with Bradshaw on the desk. The broadcast will air only one hour prior to kickoff, as opposed to the typical two hour show.