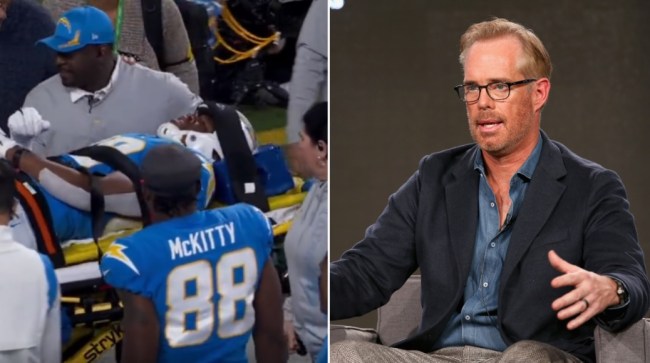 During Thursday night’s Chiefs-Chargers game, Parham appeared to get knocked out cold after hitting the back of his head on the ground during an incompletion.

While being stretchered off the field, Parham’s arms were frighteningly shaking uncontrollably.

Later in the game, Fox play-by-play announcer Joe Buck implied that Parham’s arms could have been shaking because it was cold in Los Angeles on Thursday night.

LISTEN: Donald Parham Jr. is at the hospital with a brain/spine injury. Joe Buck says he'd never speculate on an injury, then speculates DP's arm tremors were bc "it's cold tonight, at least by Los Angeles standards."

“Last thing we would ever do is speculate about any injuries, especially that type, but when you see his arms shaking and his arms shaking on his way out, that’s the part that’s most unnerving, just add this, it is very cold by atleast Los Angeles standards down on the field, hopefully, that was the issue more than anything else.”

Joe Buck just said the LA player that was knocked out cold might have been shaking because it's chilly. Watching the game with my mom and she just called him a dumbass 😂🤣 #LACvsKC

Joe Buck is trying to say he's shaking because of the cold? One of the dumbest comments I've heard a announcer say. #KCvsLAC

Because the NFL can’t square it’s legal stance on CTE with its want to be more delicate with TBIs, I have to hear Joe Buck speculate about the weather causing a player on a stretcher to convulse.

I’ll always love the game, but I’ll always hate the way people have to dance.

Joe Buck: We don’t want to speculate about an injury of this nature

Joe Buck 4 seconds later: it’s kinda cold for Los Angeles so maybe that’s why the guy convulsing from a serious head injury was shaking. He was probably just shivering because LA is chilly right now