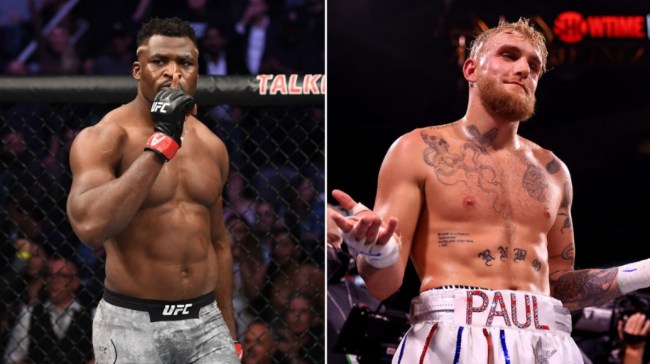 Francis Ngannou’s contract negotiations with the UFC are starting to get ugly.

On Saturday night, Ngannou, who becomes a free agent after his contract expires later this year, defeated Ciryl Gane to retain his heavyweight championship title and after the fight, UFC President Dana White was nowhere to be found.

On Monday, Ngannou appeared on Ariel Helwani’s MMA hour show and the UFC heavyweight champion revealed that his agent Marquel Martin was being sued by the UFC for talking to Jake Paul’s manager Nakisa Bidarian, who is co-owner of MVP promotions alongside Paul.

“Going into the arena, I dress up and put on my suit and I walked to the room with my manager and my coach and they were like wow…they told me they had just received an email from the UFC and they said they were going to sue him for talking to this guy Nakisa…And I’m like who is Nakisa? They was telling me I don’t know him, but it’s someone’s from Jake Paul’s team and I’m like is he the promoter or something?..and they’re like no…It doesn’t look like they (UFC) want to talk to me anymore.”

Ngannou has been adamant about wanting to box claims he’s left a lot of money on the table so that he could enter free agency.

Francis Ngannou: I was fighting for everything that I stand for.

Confirms he made $600K for his Gane fight.

Says overall he has left $7M on the table.#TheMMAHour pic.twitter.com/Tfw8e8CHB6

“The term of the contract, everything that they put into [it], they hold you like in captivity,” “You can’t do anything, you have no rights. The contract is one-sided. … You don’t even have health insurance while you’re doing this, putting your body on the line to put on the show. Risking everything.”