NBA Finals Ratings Plummet, Game 1 Is Down Nearly 50 Percent From Last Year And Is The Least Watched Finals Game In Recorded History 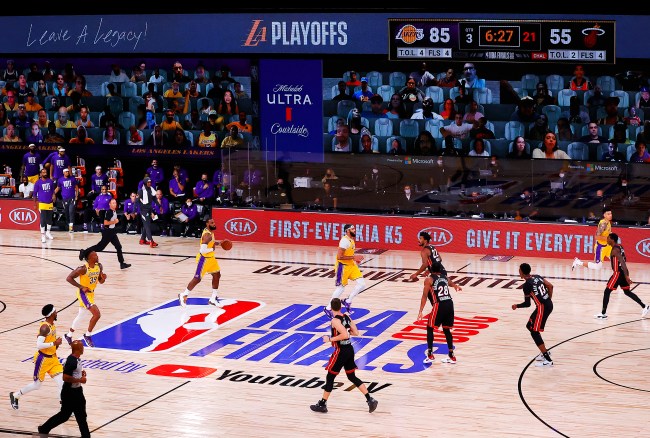 Ratings for Game 1 of the NBA Finals are in, and they’re not good.

According to Sports Media Watch, game 1 of the Heat-Lakers series drew 7.4 million viewers on ABC which is down about 45 percent from last year and is easily the least-watched Finals on record (since 1988).

Ratings: #NBAFinals opens with its smallest audience ever.

Behind Lakers-Clippers (Christmas) as top game of season and barely ahead of last year's Game 1 — of the WCF:https://t.co/Qo41Qc2xrQ

After a regular season and playoffs marked by declines, the NBA Finals opened with its worst-ever performance in the ratings.

Wednesday’s Game 1 of the NBA Finals (Heat-Lakers) averaged 7.41 million viewers on ABC, comfortably the least-watched NBA Finals game on record (dates back to 1988). The previous low was 8.06 million for Nets-Spurs Game 2 in 2003. Ratings were not immediately available; the current record-low is a 5.2 for that same Nets-Spurs game. [Related: NBA Finals ratings history.]

As goes without saying, it was also the least-watched Finals opener on record. The previous low was 9.21 million for Cavaliers-Spurs in 2007.

It is worth noting that the NBA isn’t the only sport that has suffered huge ratings loss after being forced to move their seasons due the Coronavirus pandemic. The NHL, PGA Tour, and NASCAR have all seen record lows as well.

All of them May and June events moved to August and September.

Considering that the Lakers blew out the Heat in game 1 and Miami lost two key players in Bam Adebayo and Goran Dragic, it’s not looking good for the NBA ratings-wise this year.