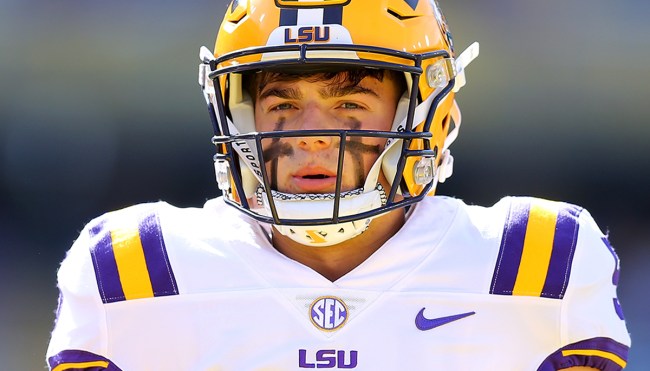 If you’ve played organized sports at basically any level, there’s a very good chance you’ve encountered the dreaded “Sports Dad” in the wild; the kind of guys who get way too emotionally invested in Little League and practically beg for their kid to file for emancipation by challenging other parents to fight them in the parking lot after a high school basketball game.

In most situations, you can’t help but feel kind of bad for the sons and daughters of Sports Dads who can only do so much to control their parent’s questionable behavior. With that said, there are also plenty of cases where the offspring of Sports Dads have no problem asking them to help fight their battles for them—which appears to be the case with LSU’s current backup quarterback.

Freshman Garrett Nussmeier was still eligible to redshirt his inaugural season heading into LSU’s contest against Alabama last weekend, and while it appears Ed Orgeron was under the impression the QB was hoping to go that route, he learned that was not the case following what unfolded in the wake of the 20-14 loss to the Crimson Tide.

You’d think Nussmeier would want to preserve his redshirt status when you consider LSU is in the midst of yet another essentially unsalvagable season, but as we learned on Monday, he’s had a change of tune—one that was communicated to the team’s coaching staff with the help of his dad Doug Nussmeier, the Dallas Cowboys coach who reportedly called offensive coordinator Jake Peetz on Sunday to discuss his son’s playing time.

The previous plan, as Orgeron stated a week ago, was the Nussmeier camp wanted to keep the redshirt on him. Which is why he didn't play vs. Alabama.

Now, Nussmeier's shifting course on the idea. He wants to be able to have the chance to play across the final 3 games.

Based on all of the currently available information, it’s hard to imagine the QB’s dad didn’t consult with his son before making the call. Given the elder Nussmeier’s status in the football world, I can understand why he was recruited to help plead Garrett’s case, but this seems like the kind of move that scouts will be sure to mention in a draft report a few years down the road if the highly-touted prospect ends up living up to expectations.