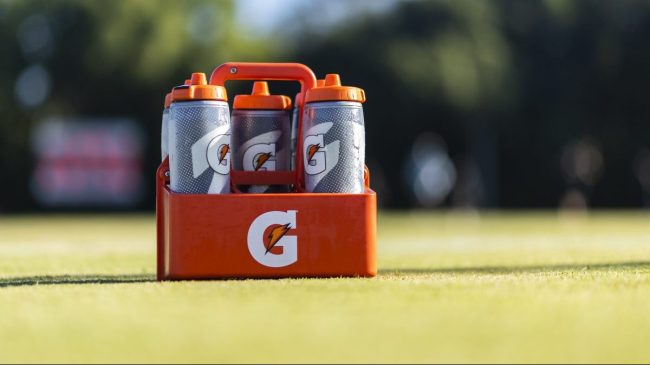 Gatorade has officially jumped the shark.

But we’ve never seen anything quite like the latest product it plans to release.

Gatorade introduced an entirely new product to its lineup on Thursday morning, and it’s one that’s sure to get some buzz.

Gatorade rolls out latest drink called Fast Twitch, has as much caffeine as two 12 oz cans of Red Bull.

Will be available on NFL sidelines this season. pic.twitter.com/WVvyABSNXc

Introducing Gatorade Fast Twitch. The energy drink is designed as a pre-workout supplement and includes the same amount of caffeine as two, 12-ounce cans of Red Bull.

Amelia Lucas of CNBC has more on the new product.

“The company says Fast Twitch is designed to give athletes an extra boost before their workouts. The market for preworkout powders is growing, fueled by industry leaders such as Cellucor C4 and RSP Nutrition. But few preworkout drinks exist, and many consumers instead turn to carbonated, sugary energy drinks.”

Fast Twitch won’t be available to customers until February. But football fans will see it long before then. That’s because NFL players will have access to it on the sidelines in the coming season. That’s due in part to Gatorade’s exclusive deal with the NFL.

Consumers had mixed reactions to the new product.

Lmao this is absolutely insane https://t.co/lv1R62Bk8G

Yeah but how does it taste with vodka? https://t.co/5y7Lg9e6RB

Though some couldn’t wait to get their hands on a bottle.

So @SBuchanan24 @EmersonLotzia should we take these before the next show and see what happens? https://t.co/Dcc4LH1h5U

@3Bills I guess I know what energy to get for the office… https://t.co/4muVDOWYZt

The NFL season gets underway on Sept. 8 when the Buffalo Bills take on the Super Bowl champion Los Angeles Rams. If the players seem to be moving faster than ever, at least now we’ll know why.