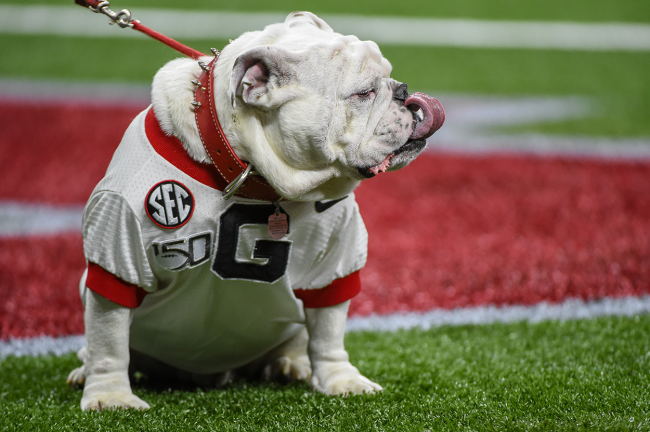 Very few mascots in sports are as recognizable as Uga the bulldog. He was in attendance at Saturday’s SEC Championship and got caught red-handed peeing on the field before the game.

Georgia’s official live mascot was first introduced in 1956. Ever since, Uga has been owned by the Sonny Seiler family of Savannah, Georgia.

He lives a luxurious lifestyle and gets treated very well.

To date, 10 dogs have carried the name “Uga.” Each of the 10 has been descended from the original predecessor and is often the son of the Uga before him.

Uga X has been the team’s official on-field mascot since 2015. He has won one SEC Championship, one Rose Bowl, one Sugar Bowl and one Peach Bowl and holds an all-time record of 55-14.

One of his 14 losses came on Saturday as Georgia lost to Alabama. Prior to the game, Uga took a stroll across the field at Mercedes-Benz Stadium.

The stadium opened for the first time in 2017, and has held quite a few events— from football, to soccer, to college basketball, to concerts. The current field, which is artificial turf, was installed in 2019 season.

Uga didn’t seem to notice the difference. Before Saturday’s game, as he walked from sideline to sideline, he stopped for a moment to relieve himself. Right inside the left hashmark at about the three-yard-line.

Obviously, nobody seemed to care. Look at Uga, how can you get mad at hime?! You can’t. But maybe his bathroom break was bad luck?

The stadium plans to replace the turf every two years, so Uga’s urine will not live forever on the field.