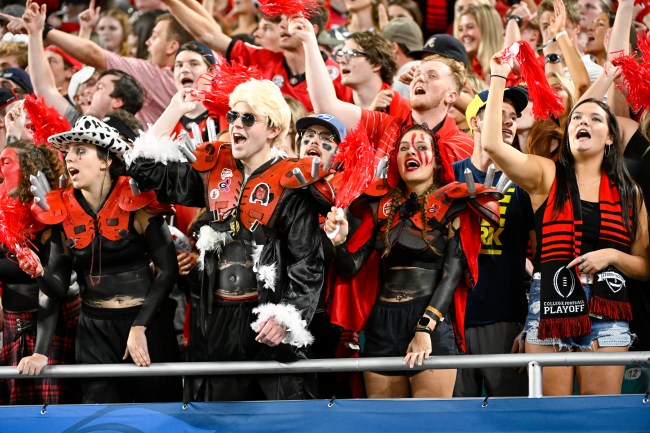 For those who are unfamiliar with the SEC, Georgia fans are amongst the most insufferable fans in sports. While rooting against Alabama because of their dominance in recent years might seem like the logical choice, it’s far easier to root against Bulldogs fans, and in turn, their team.

St. Elmo’s Steakhouse has been a landmark in downtown Indianapolis (where the College Football Playoff National Championship is being held) since 1902. It is the oldest Indianapolis steakhouse in its original location and has earned a national reputation for good food and even better service.

It’s a classy join that is a can’t-miss dinner if you’re ever in Naptown. As a result, both Georgia and Alabama fans descended upon the restaurant on the night prior to the big game.

However, one fanbase behaved themselves, while the other could not have been more obnoxious. Spoiler alert: it was the unruly Bulldog fans who were causing the problems.

For starters, Georgia fans, who are full-grown men and women, bark like dogs. (Imagine actually barking at another human like a dog in real life.)

In addition to their strange behavior, Bulldogs fans have a call-and-response chant that has been with them everywhere all weekend. It is a very strange chant, but it is fun when it is “performed” in the right place at the right time.

Who’s that coming down the track?

Mean machine in red and black!

Ain’t nothin’ finer in the land!

Than a drunk, obnoxious Georgia fan!

It started on the plane headed to Indy, which is a ton of fun and perfectly acceptable, outside of the fact that the guy leading the chant is not wearing a mask, which is required on all commercial airlines. Apparently Georgia fans are above the law?

However, it is not acceptable to partake in the ‘Calling the Dawgs’ chant at a fine dining establishment.

Georgia fans would not stop barking and chanting at St. Elmo’s on Sunday. 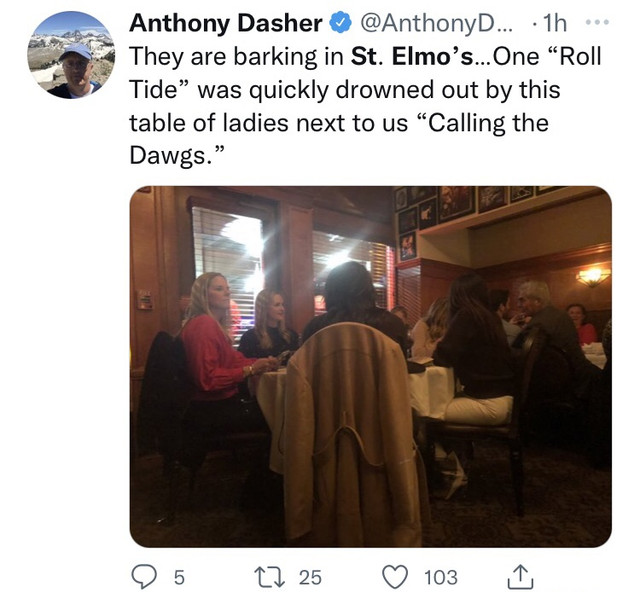 It’s one thing to do it one time. But the self-proclaimed “drunk, obnoxious Georgia fans” would not shut up. (Imagine being proud of being obnoxious??)

They are calling the Dawgs in Indianapolis landmark St. Elmos

Because the incessant chanting would not stop, the police had to get involved. Georgia fans had the police called on them, in one of the nicest restaurants in Indianapolis, because they would not stop barking like dogs and chanting about how they are drunk and obnoxious.

The cops showed up pic.twitter.com/woCYb2wxxF

Bulldogs fans, who have no sense of reality, will surely celebrate this behavior. Meanwhile, everybody else is reminded why some people dislike Alabama and its fans, but everybody dislikes Georgia and its fans.