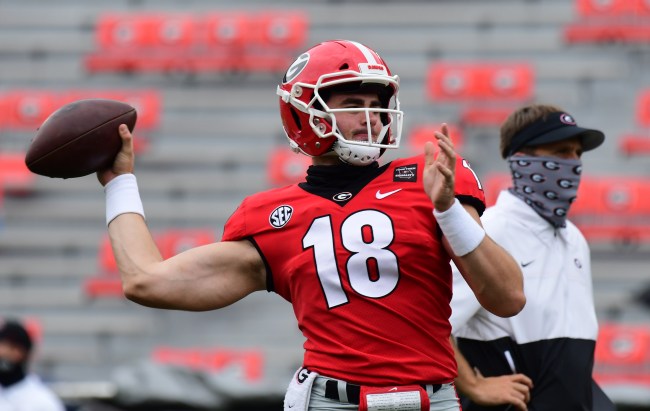 No. 13 Georgia football is set to make a change at quarterback and J.T. Daniels is expected to start against Mississippi State on Saturday, per AL.com. It’s been a long time coming for the five-star recruit who transferred to Athens, Ga. in the offseason.

Daniels, a redshirt sophomore, was named the starter for Southern California last season but suffered a torn ACL in the first game of the year. After true freshman Kedon Slovis took over for the Trojans, he chose to transfer to the Southeastern Conference in May and was deemed immediately eligible by the NCAA in July.

He was medically cleared in late September and has been Georgia’s third-string quarterback behind Stetson Bennett and D’Wan Mathis through the first six games of 2020. The Bulldogs are 4-2 and the poor quarterback play has been abysmal. Bennett and Mathis both are under a 60 percent completion rate on 185 combined attempts with as many interceptions as touchdowns and head coach Kirby Smart was due for a change.

“Since he’s been here, he’s done some nice things,” head coach Kirby Smart said of Daniels. “He’s a guy that’s worked really hard, just as Stetson, Carson (Beck) and D’Wan have done. I’m pleased with the way he’s worked. I’ve been pleased with the way he’s rehabbed his knee and improved his knee and learning our offense and the leadership he’s shown since he arrived has been very good.”

As for Daniels, he has continued to get first-team repetitions in practice since last Monday, in a week that became an unscheduled bye week after Georgia’s game against Missouri was postponed due to COVID-19. The 6-foot-3, 210-pound California native was the No. 2 pro-style quarterback in the 2018 recruiting class, experienced growing pains after the starting job amidst a three-way quarterback battle as a freshman, and threw for 215 yards and a touchdown in his only half of 2019.

In high school, Daniels played for the California quarterback factory Mater Dei and won a state championship as a junior. He threw for 12,014 yards and 152 touchdowns with only 14 interceptions in his three years as the Varsity starter before he reclassified, graduated early and headed to Los Angeles.

For Georgia to have any hope of reaching the SEC Championship game, it must beat a struggling Mississippi State team on Saturday. The battle of the Bulldogs should be a great opportunity for Daniels to debut in style, and it’s hard to be worse than Bennett and Mathis’ performances over the last two weeks.

The home team from the SEC East is currently a -24.5 point favorite on BetMGM. If you are looking to get in on the action, sign up using promo code BROBIBLE for a 100% deposit match up to $500!