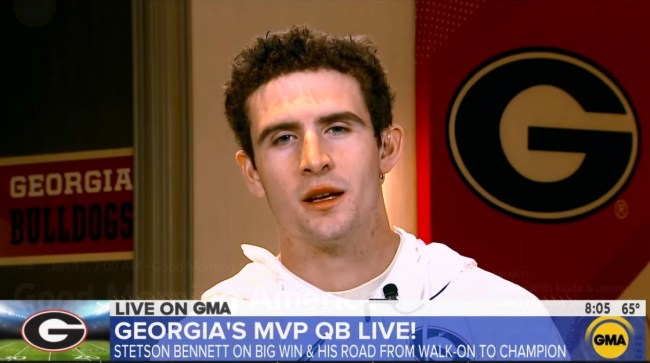 Georgia QB Stetson Bennett looks like he had a good time after beating Alabama.

On Monday night, Bennett proved all his doubters wrong by leading the Georgia Bulldogs to a National Championship win against Alabama’s vaunted defense.

ANSWERED ALL THE DOUBTERS 🗣

After the game, Bennett talked to the media about not paying attention to his critics this season, who wanted him benched in favor of JT Daniels.

“I’ve told you all along, and I think some people maybe didn’t believe me, that I really don’t hear any of that stuff, the social media and whatever, I really don’t,” “Our goal was to do what we did. We did it. Some stuff that someone said about me on the internet isn’t going to change that.”

On Tuesday, Bennett made an early morning appearance on ‘Good Morning America’, and the Georgia QB admitted to not getting very little sleep after the team’s big win.

"You gotta bet on yourself." — Stetson Bennett on his journey from walk-on player to @georgiafootball's starting quarterback!

Congrats to @universityofga on their big #NationalChampionship win. 👏 #GoDawgshttps://t.co/tMSQXrGRV4 pic.twitter.com/LnXErJXz7D

Stet looks like someone handed him a Pedialyte and told him to have a seat in that chair over there and I gotta respect it. https://t.co/yzcCmFjsuu

I’ll go under on hours of sleep, over on beers https://t.co/Z6wD16lrqE

Stetson's biggest accomplishment is waking up in time for this interview. https://t.co/F77RZszjfh

Get this man a pedialyte https://t.co/fMLAgNrVG2