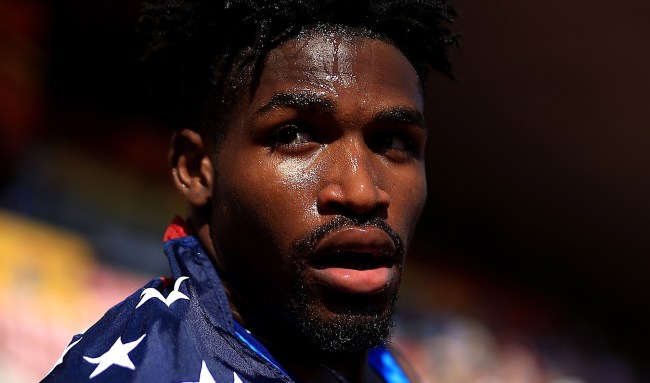 University of Georgia sprinter Elijah Godwin was impaled by a javelin as he was running a backwards sprint drill on the infield of the track Tuesday afternoon.

And by impaled, we mean the javelin through went Godwin’s back just below his shoulder blade and punctured his lung. Yikes.

Georgia track and field associate head coach Don Babbitt said there was blood coming out of Godwin’s mouth, the Red & Black reports. A police report states that firefighters arrived within two minutes and cut part of the javelin off with an angle grinder.

The rest of the javelin was surgically removed in the hospital, where Godwin was treated for a punctured and collapsed lung.

WXIA-NBC 11 in Atlanta reported that university said in a statement that the javelin was sticking out of the field at an angle.

It went through Elija’s back and punctured his lung. He immediately went down and his teammates packed the area with gauze until he could be rushed to a hospital for emergency surgery, according to the police report.

Godwin successfully made it through surgery at Piedmont Athens Regional Medical Center. 11Alive’s Kaitlyn Ross spoke to his mother who said he is out of surgery, off of oxygen and breathing on his own.

“We would like to express appreciation for all those who acted so quickly and efficiently in coming to the aid of Elija,” said UGA Director of Sports Medicine Ron Courson. “Special thanks to our sports medicine staff, UGA Police Department, Athens-Clarke County Fire-Rescue, National EMS, and Piedmont Athens Regional Medical Center.”

“The javelin pierced his lung and they took a camera in and carefully made sure all organs were functioning properly. The only organ that was damaged was his lung,” Godwin’s mother Ginger Luby told WSB-ABC 2.

Luby also stated that he is expected to make a full recovery and that her son hopes to be back with the team in the next couple of months.