Giancarlo Stanton: Jose Fernandez Told Me We Would Be Yankees Teammates Someday 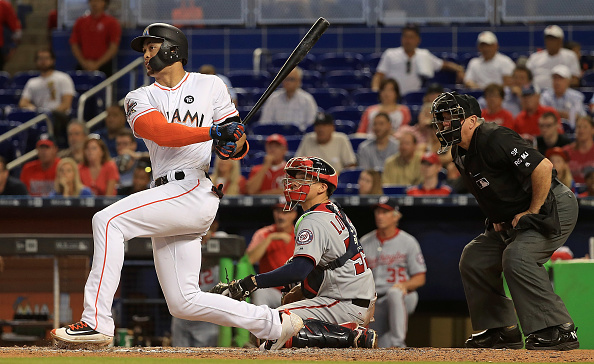 Imagine the New York Yankees not only fleecing the Miami Marlins by stealing Giancarlo Stanton, but imagine the Evil Empire also snagged Jose Fernandez if he hadn’t died prematurely. The newest Yankee baseball immortal said his former Miami teammate had dreams of playing in pinstripes. On Sunday night, Stanton accepted the MVP award at the 95th annual Baseball Writers Association of America dinner and he told of the many predictions Fernandez made when he was still alive.

Former Marlins ace Jose Fernandez died in a boating accident in September 2016, but he had grandiose plans that including playing in the Bronx. Stanton, who sat next to his fellow Bronx Bomber Aaron Judge, reminisced about the time Fernandez told him they’d both be on the Yankees. The anecdote apparently happened following the 2016 All-Star game, when Fernandez told Stanton, “if it doesn’t work out (in Miami), I’m signing with the Yankees — and I’m bringing you with me.” Stanton then told everyone at the dinner, “Now that I’m here, I’m going to take a little piece of him and bring it with me.”

The comments by Stanton last night RE : Jose to NYY are accurate. What is inaccurate is any report that stated he was going to give Marlins a discount. JDF was insulted at previous regime’s extention offer. He was going to free agency. 🙏🏻 RIP

If Fernandez didn’t die, he would have been eligible for free agency after the upcoming season at the age of 27. With the cost-cutting ways of the Marlins, it was pretty slim that they would have been able to sign one of the best pitchers in the MLB. Fernandez made other predictions for Stanton including that he would hit 60 home runs and win the NL MVP in 2017. Stanton won the NL MVP in 2017 and came up one dinger short of 60 home runs in 2017, hitting an incredible 59 home runs. “This has been an amazing ride,” Stanton said. “I’m excited to be here in New York and experience the big city and bright lights … [Fernandez] was a big factor in achieving this and doing something special for him, that was a big part of this season.”

Last night at the #BBWAA @Giancarlo818 gave an incredible speech in memory of star pitcher, Jose Fernandez. Fernandez told Stanton, “Hey if this doesn’t work out here, I’m going to be a free agent and I’m going to sign with the Yankees and you’re coming with me.” @Yankees pic.twitter.com/QRkIPTRpH3