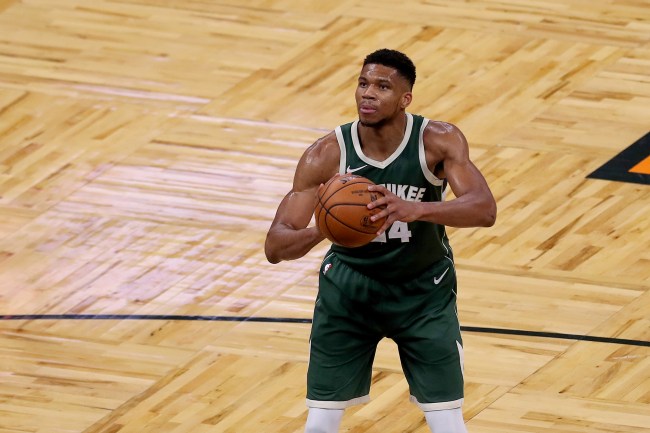 Giannis Antetokounmpo is struggling badly at the free-throw line this last season and he’s experimenting with different bizarre motivational techniques in an attempt to fix his shooting woes.

On Saturday night, an excerpt from CBS Sports’ Jack Maloney’s article on Giannis’ free-throw issues went viral after people were stunned about how the Bucks superstar had his girlfriend run in practice if he missed free throws while carrying around their son.

Umm what the heck Giannis?? pic.twitter.com/NXun7MaPMx

The origin of the Giannis free-throw workout story comes from an ESPN report that was published in December.

In between the most rigorous parts of the workout, Antetokounmpo would shoot a pair of free throws. That way, by the time he stepped up to the stripe, he was breathing heavily — the way he would in a game.

Antetokounmpo added a wrinkle to the routine. If he missed his free throws, his coaches would need to run and he would need to watch. Seeing other people pay for his mistakes was torture for Antetokounmpo, and this is a common motivational strategy used by high school coaches everywhere.

That wasn’t enough. He invited Riddlesprigger and their 10-month-old son, Liam, to the gym. Now, Antetokounmpo had to hit his free throws or go through the torture of watching Riddlesprigger run with Liam. It was an airtight plan to boost accountability and focus.

Fans were weirded out by Giannis’ latest motivational tactic that involved his girlfriend and their son.

This is menace behavior Giannis. Also I don't think it worked. https://t.co/3iwvTYlkC3

Look on the bright side his girlfriend is now an Olympian🤣

Lol the image of his girl running suicides cuz of his bricks is hilarious https://t.co/c4ytIg61mp

Giannis is a psychopath https://t.co/NbaV9r2w2O