Giannis Antetokounmpo Admits Kevin Durant Is The ‘Best Player In The World’, Wants Chance To Guard Durant In Game 6 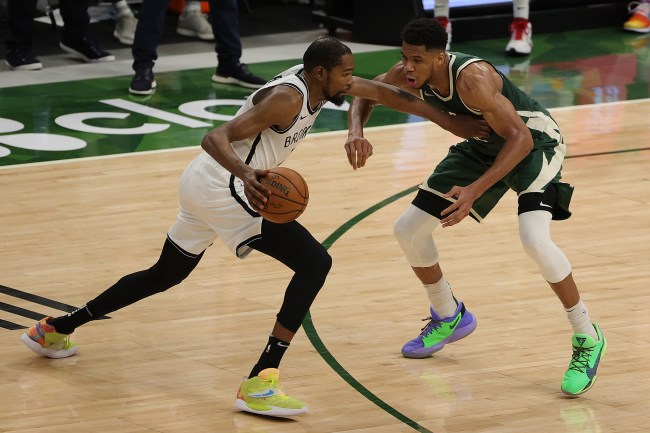 Giannis Antetokounmpo wants a chance at stopping Kevin Durant in game 6 against the Nets on Thursday.

On Wednesday night, Durant absolutely destroyed the Bucks with a historic 49 point performance while playing all 48 minutes to take a commanding 3-2 series lead. Even Giannis had to admit that KD is currently the best player in the world.

Giannis admits Kevin Durant is the best player in the world pic.twitter.com/Gg4SaHBZEm

After the game several people including TNT’s Kenny Smith and Portland Trailblazers guard CJ McCollum criticized the Bucks’ defensive player of the year candidate for not guarding Durant down the stretch.

During his postgame press conference, Antetokounmpo told the media that he wants the challenge of guarding Durant in game 6 but only if that’s what his coach wants him to do.

Giannis says he “would like to take the challenge” of guarding Kevin Durant if coach Bud wants him to pic.twitter.com/PmZr4tApOa

“I would love to go into game 6 being able to guard him and if the coach wants me to do that, I’m ready for it.”

It’ll be interesting if Giannis gets his wish and actually guards Durant one-on-one down the stretch in game 6.