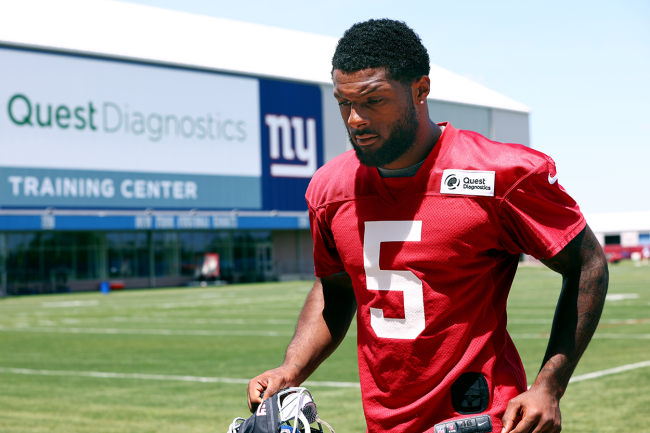 Kayvon Thibodeaux was one of the most dominant players in college football over the last two years and was drafted No. 5 overall as a result. The Giants’ new rookie EDGE rusher is going to be used in a hybrid linebacker and defensive end position and is putting in the work to be an immediate impact player this fall.

However, he had to miss a portion of New York’s spring practices after suffering a minor hip injury. That won’t stop Thibodeaux for being ready come training camp.

As the 21-year-old prepares for his first year in the NFL, his offseason is seemingly anything but. In a time of year where calendars are supposed to be more lax, Thibodeaux’s does not feel that way.

According to NFL.com, Thibodeaux’s weekday offseason schedule is as follows:

While the NFL is a dream job for most players in the league, it’s still a job. And a full-time one at that.

As Kayvon Thibodeaux looks ahead to his rookie season with the New York Giants, he is keeping his goals high, but attainable.

“I don’t want to think too big. You have to compartmentalize the season. If I could average at least one sack a game or contribute five to 10 tackles a game, then I’ll be good.”

“That’s the smartest way to do it. You never want to look at the end. You always want to take it day by day. If you reach for the top, you’ll miss those steps right in front of you. So I know if I take those small steps and get that one sack or five to 10 tackles a game, by the end of the season, I’ll be where I want to be.”

Since Thibodeaux was drafted in April, he has been mentored by Hall of Famer Michael Strahan. The two have worked closely together throughout the spring.

Now that Thibodeaux is in the system, the ball is in his court. He has everything he needs to succeed — from talent, to confidence, to health and support — and now he needs to put it all together and live up to his potential.