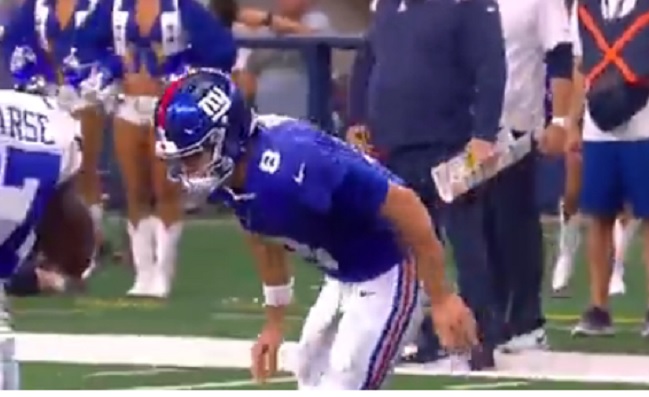 The NY Giants are having a rough day with injuries.

Early in the game, the Giants lost star running back Saquon Barkley to a gruesome-looking ankle injury.

The Giants went on to loset QB Daniel Jones who took a big hit to the head that caused him to stumble around while walking.

Here's the hit on Daniel Jones and the stumble after…

Prayers up to Daniel. pic.twitter.com/DissqgZLdd

Oh no Daniel Jones is wobbling. Got smacked pic.twitter.com/nj6fBHvsnH

Jones was immediately taken to the locker room for evaluation after the hit and did not return in the first half.

Daniel Jones took a huge hit and got knocked woozy. He's been taken directly to the locker room and Mike Glennon is entering the game.

Update: Jones was diagnosed with a concussion and forced to sit out the rest of the game.

#Giants QB Daniel Jones has been ruled out for the rest of the game with a concussion. He was wobbly on the field after taking a big hit. Mike Glennon the rest of the way. #NYGvsDAL