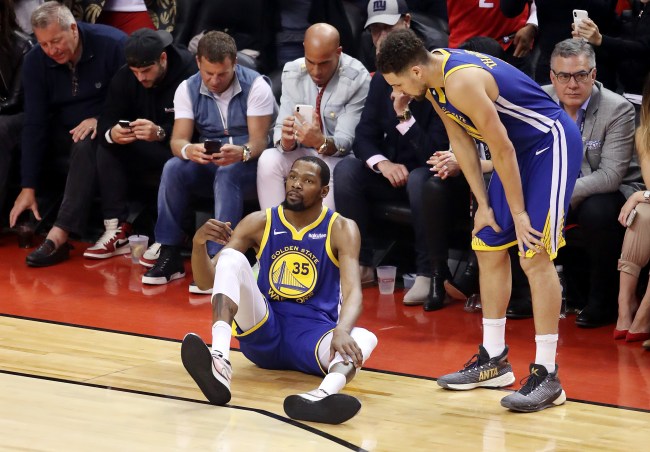 During game 5 of the NBA finals, Kevin Durant suffered a devastating Achilles injury After sitting out for over a month under careful guidance from Warriors team doctors after sustaining a calf strain during a playoff game vs the Houston Rockets.

Durant is going to be sidelined for next season and the injury has complicated his free agency but he still has plenty of options on the table.

According to ESPN’s Brian Windhorst, the Golden State Warriors have given Durant the option to a sign and trade that would allow him to get his full five-year supermax contract.

.@WindhorstESPN on the Warriors and KD: "One of the things being discussed right now is that the Golden State Warriors would offer Kevin Durant a 5-year contract, 57M extra than he can get signing elsewhere. Let him rehab and then work with him to be traded…" pic.twitter.com/otE9lSBCaP

“One of the things that is being discussed right now is that the Golden State Warriors would offer Kevin Durant a five-year contract, $57 million extra than he could get signing elsewhere, let him rehab and then work with him to be traded. Potentially to New York, potentially to somewhere else. It would be their way to sort of take care of him monetarily after what he just went through and also protect the franchise and get some assets.”

The move would allow the Warriors to get something back in return instead of losing Durant for nothing in free agency.

“For lack of a better term, it would be a delayed sign and trade. It’s the only way Durant could get five years and play elsewhere. … The Warriors go into this as a bit of a last-ditch effort to not lose Kevin Durant for nothing. And what he would get out of it would be an extra $57 million come off of a devastating injury. He would be protected and get all of his money. Now, he’d have to trust the Warriors that they would actually work with you on a trade, but it’s something that has at least been discussed.”

While KD has plenty of options to choose from this offseason the Warriors and the Knicks seem to be the favorites land him according to Odds Shark.

Odds for what team Kevin Durant will be on for the first game of the 2019-2020 NBA season: