Golden Tate And Jalen Ramsey Fight On The Field After Game, Both Have Bad Blood After Ramsey Left Tate’s Sister While She Was Pregnant 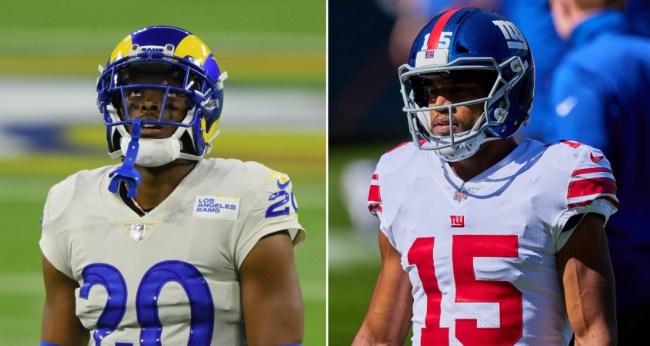 Golden Tate kept his promise and said he was going to confront Jalen Ramsey for “disrespecting his sister.

Last year, Tate blasted Ramsey in the media for leaving his sister while she was pregnant for a stripper.
Via NY Post

Ramsey is the father of two of Tate’s young nieces, but he reportedly ended a long-term relationship with Tate’s sister during her pregnancy last summer to date a Las Vegas dancer. Breanna Tate — a former track-and-field standout at the University of Mississippi — gave birth in September 2019, shortly before Ramsey was traded from the Jaguars to the Rams.

“I’m not happy at all with the disrespect that he’s shown towards my sister, and the things he’s done in the past, but I don’t really want to go too much into it,” Tate told The Post.

Tate would go on to say that he was going to confront Ramsey one day for what he did to his sister.

He know he gonna have to see me.

Things apparently got heated between Tate and Ramsey after today’s Giants-Rams game when they were seen getting a fight on the field.

Ramsey and Tate walked toward each other after the final whistle. They both took swings almost simultaneously and then went down in a heap. Their teammates pulled them apart.

There’s a fight on the field after the game clock hits zero, press box consensus says it was Jalen Ramsey and Golden Tate involved pic.twitter.com/m6WhFUMhwf