Golden Tate Exchanges Words With Jalen Ramsey, Who He Says ‘Disrespected’ His Sister By Leaving Her While She Was Pregnant For A Stripper 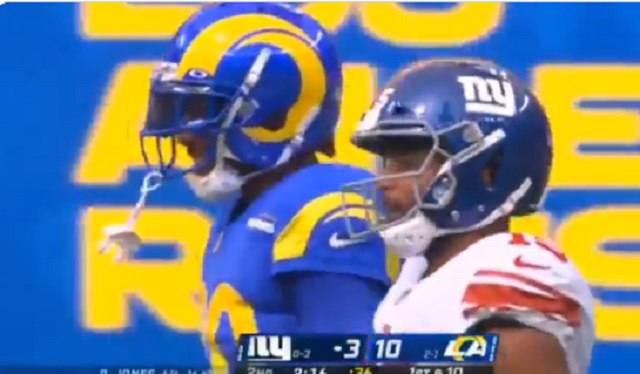 Sunday’s Giants-Rams game has a bit of extra drama thanks to Golden Tate and Jalen Ramsey.

Last year, Tate was not happy with Ramsey for leaving his sister while she was pregnant for a stripper.

Golden Tate is not happy about how the relationship ended last summer.

The two face off today. https://t.co/TTZdjzm9Nf

Ramsey is the father of two of Tate’s young nieces, but he reportedly ended a long-term relationship with Tate’s sister during her pregnancy last summer to date a Las Vegas dancer. Breanna Tate — a former track-and-field standout at the University of Mississippi — gave birth in September 2019, shortly before Ramsey was traded from the Jaguars to the Rams.

“I’m not happy at all with the disrespect that he’s shown towards my sister, and the things he’s done in the past, but I don’t really want to go too much into it,” Tate told The Post.

On Sunday Tate was seen exchanging words with Ramsey on the field after he was able to get a first down.

Golden Tate makes a catch and gets a first down with Jalen Ramsey covering him. They had some things to say to each other afterward.

Update: Ramsey got his revenge on Tate with this tackle.

Jalen Ramsey with some epic textbook tackling this season.

For those of you who don’t know… Jalen Ramsey has two children with one of Tate’s sisters and ended the relationship and Tate voiced his disgust with Ramsey….. that hit was personal lol https://t.co/4gVPtx27HQ