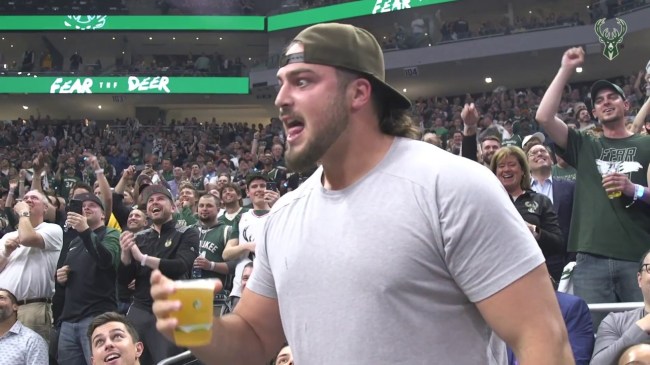 Green Bay Packers offensive tackle David Bakhtiari tweeted out a content emoji on Saturday night, the eve prior to his first game back from broken ribs against the Jacksonville Jaguars. However, his emoji alluded to something greater than the All-Pro’s return to the lineup; he had signed a massive deal. Green Bay officially announced the signing on Sunday shortly after the game.

The four-year contract extension can be worth up to $105.5 million averages $23 million, making him the highest-paid offensive lineman in the NFL.

When asked about how he was going to celebrate his signing, and the team’s 24-20 win, the 29-year-old University of Colorado alumnus said he planned to have himself a couple of ice cold brews and a cigar.

How David Bakhtiari will celebrate his new contract:

All with his fiancé, two pups and a stoagie. pic.twitter.com/Dg8zEUagBQ

Bakhtiari, of course, has not hidden his love for beer in the past and once utterly embarrassed his quarterback in a chugging contest at a Milwaukee Bucks game.

Out of high school, Bakhtiari was listed at 6-foot-4, 266 pounds. 12 years later, he tips the scale at 310 pounds. Maybe all of the hops drinking helped him to pack on the poundage necessary to reach the NFL, or maybe it’s just an acquired skill. Either way, it’s working, so why stop now?