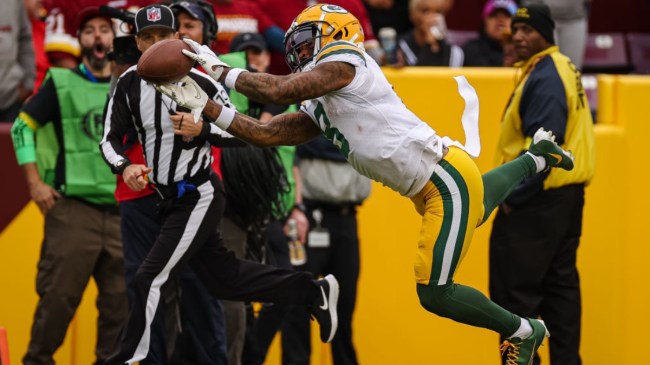 The Green Bay Packers seemed to finally start to get this figured out on Sunday.

After losing 5 games in a row, including a loss to the Detroit Lions where they only scored 9 points, the Packers were able to fight back from down 14 in the 4th quarter to beat the Dallas Cowboys in overtime.

The return of David Bakhtiari clearly made an impact for the Packers as they held one of the NFL’s best pass rushes to just 2 sacks in the game. They also got a huge game out of Christian Watson.

The rookie had yet to make much of an impact before Week 10, but stepped up for 4 catches for 107 yards and 3 touchdowns against the Cowboys.

Unfortunately, the game didn’t help the stock of all of the Packers’ young players.

2021 7th round pick Kyle Hill didn’t get a touch against the Cowboys in his 2nd game back from injury. The game was worse 2021 3 rounder Amari Rodgers.

Rodgers fumbled a punt in Sunday’s game. It was his 5th fumble of the season and his 2nd fumble lost.

Now both Hill and Rodgers and have been released according to Adam Schefter.

The Rodgers release comes after months of him struggling to break into a Packers wide receiver rotation that was desperately in need of help. Over 2 seasons with the team, Rodgers made only 8 catches for 95 yards.

His release isn’t a major surprise despite the draft capital the Packers spent on him just a year ago.

Hill’s release is a bit more surprising. The Packers have become a much more run-heavy offense in recent seasons. While Hill was the clear 3rd option at the position, he could have had a major impact if either Aaron Jones or AJ Dillon suffered an injury.

These releases are just another example of the Packers’ struggles to help their offense through the draft.