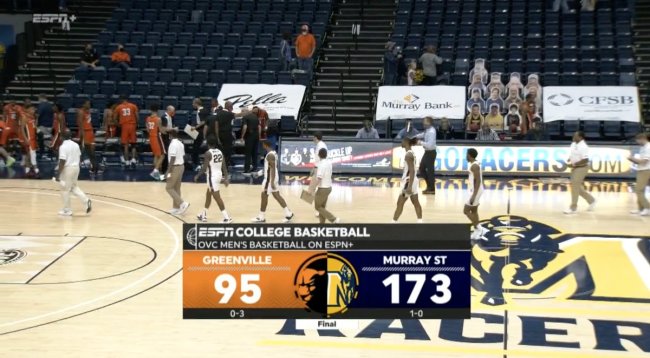 Murray State basketball, Ja Morant’s alma mater, scored 173 points on Sunday and became tied for the 4th-most points scored in a single game in Division I men’s basketball history. But that wasn’t even the craziest part.

The 173 points scored by @RacersHoops is tied for the 4th-most in Division I men's basketball history:

Murray State’s opponent, Greenville University, is a small Division III, liberal arts school from Illinois with a Methodist affiliation. Its first three games of the season have come against Samford, Kansas City and Murray state, all on the road, and the school has not scored less than 95 in any of the matchups. While it seems that nearly 100 points should win a game, or at least come close, Greenville is allowing an average of 161 points per game to its opponents.

The Panthers philosophy is simple, but ineffective against equal or better opponents— more possessions, more shots and more points will allow them to outscore you. In the opening game of the year, thirteen different players recorded an attempt and of the 75 shots taken, 46 were from beyond the arc.

In the second, the total attempts bumped to 86 and the three-point attempts remained the same. On Sunday, in the boat race, Greenville took 97 total shots and 66 (!!) from downtown. That’s an average of 2.425 attempts per MINUTE! The team shot less than 30 percent from the field and just over 25 percent from three-point range and nearly allowed their (already high) total points scored to be doubled by Murray State.

Defense is nonexistent for the Panthers, and they cherrypick on the defensive end fairly frequently. Head coach Dr. George Barber’s team is the school’s all-time leader in wins as head men’s basketball coach and he doesn’t care about how it goes down. Scoring more is always the goal.

In 2019, Greenville defeated Fontbonne University 200-146. Ahead 196-145 in the game’s final minute, it intentionally fouled to get the ball back. With 198 points and only a few seconds remaining, Greenville did it again, and hit a lay-up at the buzzer to score 103 points in the second half and reach the 200 mark.

The Panthers finished one win above .500 last season, so the strategy works on occasion, but they’re off to a rough start with their buy-games in 2020.