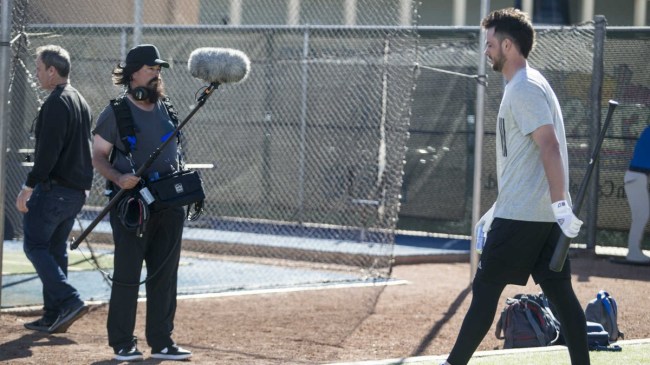 There are only 58 days 2 hours and 49 minutes 39 until Opening Day. That is when the Chicago Cubs will attempt to defend their World Series title and try to not allow another 108-year championship drought. One of the young studs for the Cubs was slugger Kris Bryant. The National League MVP new-found fame has made him a national celebrity and was told he was going to film a commercial which recorded him taking batting practice. But before they could finish the guy throwing BP gets called away. That’s when the “sound guy” jumps in to toss to Bryant. The sound guy was none other than four-time Cy Young winner Greg Maddux.

Maddux is also a Cubbie, he was drafted by Chicago and played with the Cubs from 1986 – 1992, but he wasn’t about to give Bryant some meatballs to smash over the fence. Instead, Bryant watched some nasty curves and cutters dive past him from the Hall of Fame pitcher.

“Sound guy has a pretty could curve,” Bryant says.

As far as baseball pranks, this is top-notch.