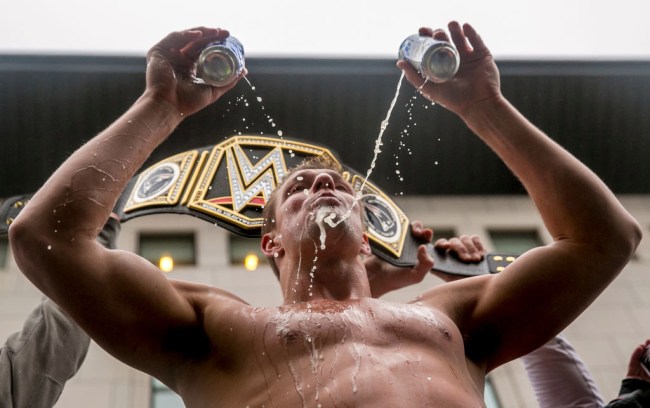 New England Patriots tight end Rob Gronkowski sat on the bench last Thursday night with a thigh injury. Gronk’s absence from the game didn’t stop Tom Brady and the Patriots from beating my beloved Bucs in Tampa by 5-points after Tampa Bay kicker Nick Folk (who has since been fired) missed three field goals.

While Gronk’s absence from the active roster on Thursday night didn’t cost the Patriots the game, it might’ve cost Rob Gronkowski a literal shit ton of money due to his contract structure according to Isaiah Houde at Patriots Wire. This comes from a report by ESPN’s Mike Reiss who outlined the tiered structure of Gronk’s contract, and how missing snaps for an entire game might cost Gronk several million dollars:

Gronkowski has now played 257 of 365 offensive snaps (70.4 percent) this season. One way for him to hit his top tier of $10.75 million is to reach 90 percent playing time. To hit the second tier of $8.75 million, it’s 80 percent; the third tier of $6.75 million is 70 percent.
Gronkowski is currently right at the edge of the third tier when looking solely at playing time.
He can still reach the first and second tiers based on receptions, receiving yards, touchdowns or All-Pro recognition, which might now be his best hope after missing Thursday’s game. (via)

I just can’t wrap my mind around being a professional football player and having to weight the decision to play in a game, when you are legitimately injured, because taking those snaps might help you reach a higher tier of your contract. It’s blowing my mind that a contract exists that incentivizes a player to play even when they’re hurt. And I’m guessing that the majority of contracts for injury prone players are like this. Just seems wrong. If contracts like this exist I feel like there needs to be some degree blindness to the structure so players and coaches aren’t forced to make injury decisions when a few snaps are on the line which will net the players millions of dollars. Maybe they are structured that way, I don’t know. Just seems wrong to encourage someone to put their injured body on the line for the sake of millions.

For more on this story, you can head over to Patriots Wire and/or ESPN.