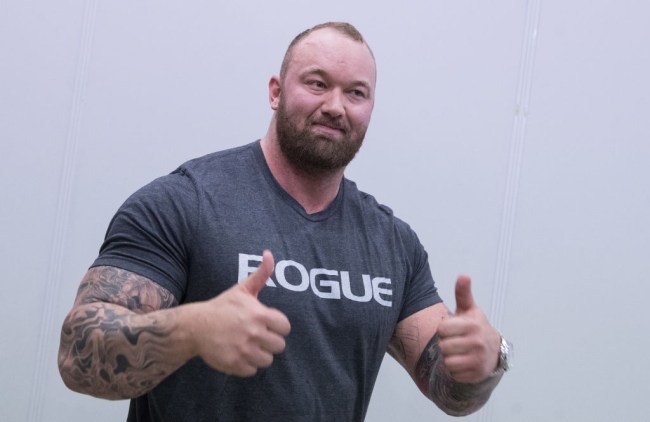 When you think of the strongest men on the planet, Hafthor Bjornsson and Eddie Hall instantly come to mind. These two behemoths have won numerous strongman competitions and competed against each other for the titles. Throughout the years of strongman tournaments, The Mountain and The Beast have developed quite the rivalry. Now the two titans of strength may face one another in the ring.

When Hall won the World’s Strongest Man event in 2017, he edged Hafthor, who was the runner-up.

These two monster-sized men have gone head-to-head in many competitions and have a raging rivalry. Now, their strongman bad blood may spill into the boxing ring. During a recent Q&A on Hall’s YouTube channel, The Beast was asked: “Who would win in a fight between you and Thor?” At the 21-minute-mark of the video, Hall responds to the question by saying, “That’s a bit of a touchy one.”

“I just know what background I’ve had. I’ve been brought up with my fists,” Hall said. “Always been a fighter. Always fought my way up. I love boxing. I love keeping fit in the boxing ring.”

“If you were to arrange a boxing match between me and Thor, I can tell you this, I would train for it, I would train my hardest for it, and I’d knock his head off,” Hall boasted in the vide. “I think I’d win.”

Bjornsson has responded to The Beast’s boxing challenge and claims that he would knock The Mountain’s head off, and he literally laughed it off. “That’s f*cking hilarious,” Hafthor screams as he bursts into laughter. “Bro, have you seen your size? Do you seriously think you can fight a guy my size? You’re what, like, like, 380 pounds right now? You’re like, 6’5”? I’m 6’9” man, and I weigh 440 pounds. Bro, get out of here.”

“But seriously, if you want to fight me like seriously, f*cking, let’s do it. I’m down,” Thor said.

“So if this is going to happen, I would want this to happen in 2021,” the Game of Thrones actor said. “He should understand that. I’m now training for the Arnold’s Classic. I want to have at least a year to prepare myself for that fight. So if you want to do it Eddie, let’s do it in 2021.”

You can see The Mountain’s response to Eddie Hall at the 17-minute-mark of the video.

Last week, Hall uploaded a YouTube video titled “Worlds Hardest Punch??? Worlds Strongest Man Eddie Hall,” where he showed off some scary punches that would do damage if he connected.

It would be fascinating to see these two behemoths enter the ring and fight each other. While they have superhero strength, that doesn’t equate to being a great fighter. Let’s hope this battle between the colossal men happens in 2021.