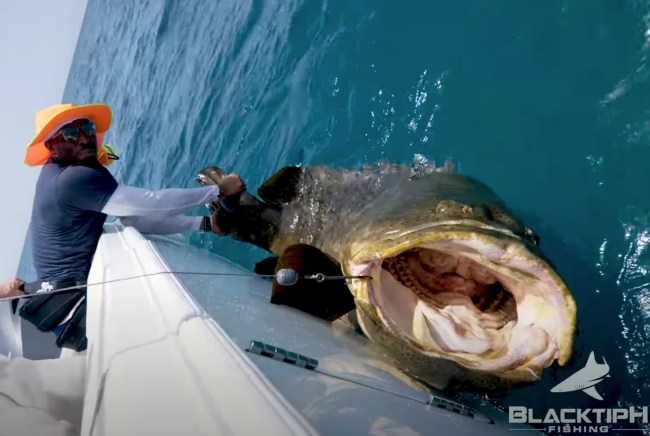 Goliath Grouper are some of the biggest fish you’ll find in saltwater. The IGFA all-tackle world record for Goliath Grouper was a 680-pound fish caught in Fernandina Beach, Florida all the way back in 1961. And that record hasn’t ever been broken in America because these fish are a protected species and anglers can’t keep them.

But their ‘protected’ status doesn’t stop people from fishing for them. Despite this being a protected species just about anyone who spends time on the water in Florida will tell you they are a borderline problematic species because they grow so large and destroy healthy reefs along the way. They’ll show up on a reef, eat everything in sight, and move along to the next one. Eventually, they get so big they have no predators.

I’m getting sidetracked, my bad. I’m not running on a lot of sleep today. So in this clip, Josh from BlacktipH takes former NFL linebacker Sam Barrington and Cowboys safety Haha Clinton-Dix out fishing for these massive Goliaths. Haha manages to reel in the biggest fish of the day and this was actually the second BlacktipH fishing trip for Sam Barrington, the previous one was a few years back.

They kick off the action by catching some Bonito/False Albacore as bait. Sam catches the first grouper but Haha’s first fish is the biggest. And they manage to reel in EIGHT of these Goliath Grouper in total.

If you enjoyed that you should 100% check out this clip from Everglades Fishing Co. (and follow Capt. Jimmy on Instagram). He was fishing out of Everglades City and a massive Goliath Grouper popped up and swallowed a shark whole as they were reeling the fish in. A pretty wild encounter that was all caught on camera.

The Goliath Grouper has been a protected species in US waters since 1990. There are always rumblings of taking them off the list but nothing’s happened yet. They’ve also been protected in Caribbean waters since 1993.