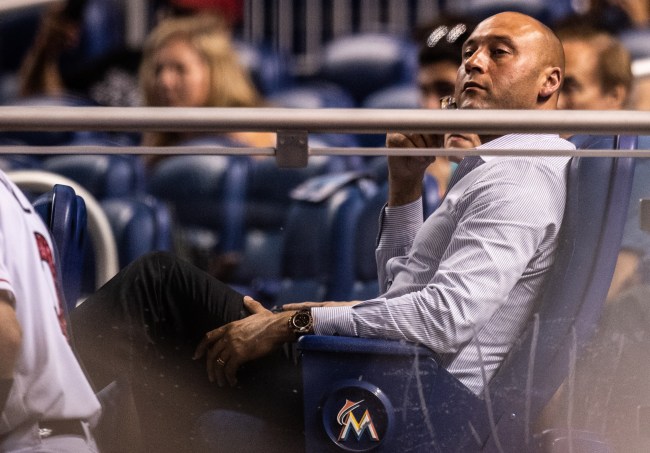 Former Yankees shortstop Derek Jeter is a lock for the Baseball Hall of Fame when he becomes eligible in 2020.

Being a 14-time All-Star 5-time World Series champion, a World Series MVP, AL Rookie of the Year with 3,465 hits and a career .310 batting average will do that for a guy.

That being said, at least two current Baseball Hall of Famers are leaning towards boycotting Jeter’s induction ceremony when he inevitably gets enshrined at Cooperstown next July.

Why? Well, as you may recall, Jeter has been the Chief Executive Officer and part owner of the Miami Marlins since September of 2017.

In his first season in that capacity, the Marlins had the third worst season in franchise history going 63-98 (.391 win pct.).

Many people around the organization are not happy with the way Jeter has handled the team, including a couple of Hall of Famers who were fired by Jeter after he became the Marlins CEO.

“I sincerely doubt [that I will attend] at this point,” Andre Dawson told Bleacher Report when the 2019 HOF class was inducted. “All indications are likely not. … I can’t speak for Tony. But I don’t have a sense or feeling like I want to sit on that stage to hear what [Jeter] has to say.”

Perez was less definite than Dawson, indicating that he has reached a decision but adding that he is reluctant to announce it a full year in advance.

Perez told B/R that if he does boycott, he will not hide behind an excuse, such as feigning an illness. Instead, he said, he will tell the truth: That he is staying away because of Jeter.

“It wasn’t nice, what happened at the end,” Perez said.

Instead of speaking to them himself, Jeter had David Samson, the outgoing club president who had also been told he was being ousted, swing the ax. Then when the backlash among the fanbase grew, Dawson and Perez were offered their old jobs back at significant salary cuts — from $85,000 to $25,000 — and with the conditions that they were to stay out of the big league clubhouse and not dress in uniform as instructors during spring training.

None other than Pete Rose also took umbrage with how the pair of former sluggers were let go, saying, “You’ve got two Hall of Famers who are class guys, and [the Marlins] are not tearing the f–king door down in terms of paying them, and then Jeter’s going to take $5 million a year and have the guy he bought the team from fire them. What background does he have in running a baseball team? He’s a great shortstop, okay?”

He was a great shortstop, but unlike this November’s Hall of Fame voting results, the jury is still out on the rest of his baseball career.

It’s also possible that other Hall of Famers who are close to Dawson and/or Perez will join them in their silent protest.