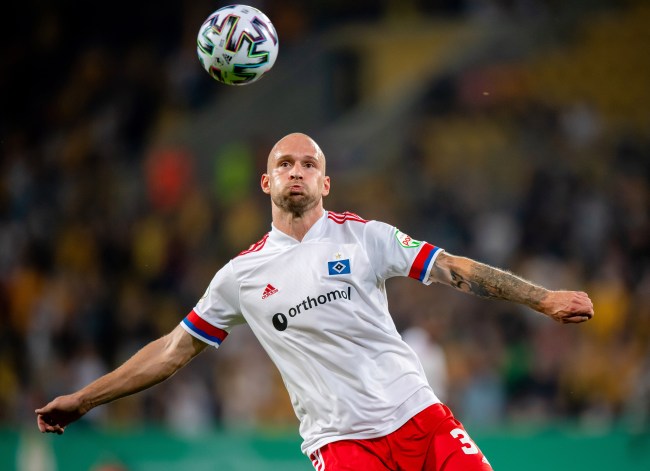 The first round of the German Cup will wrap up today when Bayern Munich takes on Düren. The first round matches took place across Friday, Saturday, Sunday, and Monday. The DFB-Pokal (aka German Cup) is similar to England’s FA Cup where 64 teams compete in a knockout tournament competition that spans most of the year (usually it runs August to May).

On Monday, Hamburger SV (HSV) was knocked out of the German Cup by Dynamo and a post-match interview was cut short when defender Toni Leistner entered the stands to fight some fans who were chirping too loud. And by ‘fight’ I mean he shoved one to the ground and scuffled with others before security intervened.

All things considered, this could’ve been A LOT worse but the Dynamo fans were riding the high of knocking HSV out of the German Cup and were feeling good. Prior to Toni cutting the interview short, objects and insults were being hurled in his direction and the tension was palpable.

Here’s the wild moment when defender Toni Leistner walks away from the interview to get into it with fans in the stands after his team’s 4-1 loss. Am I crazy or is it extremely chilling to see a guy walk into a potential brawl like that as calm and collected as he is? The dude isn’t flinching at all. Ready for anything.

Unbelievable scenes as Hamburg were knocked out by Dresden in the Cup pic.twitter.com/TWtXEM7NxI

fresh off a 1-4 loss, Hamburg defender @tleistner37 cut short a postgame interview today to help an opposing fan straighten his polo and the first thing I thought was “WHERE IS YOUR MASK YOU LUNATIC” because 2020 has officially broken my brain

Toni Leistner released a statement on his Instagram story where he claims the insults were about his family and ‘below the belt’, directed at his daughter and partner. He did, however, apologize and say he’d never react like that again.

I think his apology is sufficient and now I want to see the same from all of the fans who insulted him along with the team and security staff that enabled those fans to act the way they did. There’s not nearly enough accountability in sports when fans act like morons. They feel shielded from the athletes as if they’re untouchable because they bought a ticket. That should never be the case. If those fans insulted his daughter and partner at a bar he’d kick ’em in the family jewels and go about his business.

Actually, it would likely never happen in a person-to-person situation because the cowardly fans would’ve never felt empowered by the mob mentality. But I almost always side with the athletes in these situations. If the fans are hurling vile enough insults to drive an athlete into the stands to fight then those same fans deserve some instant karma.