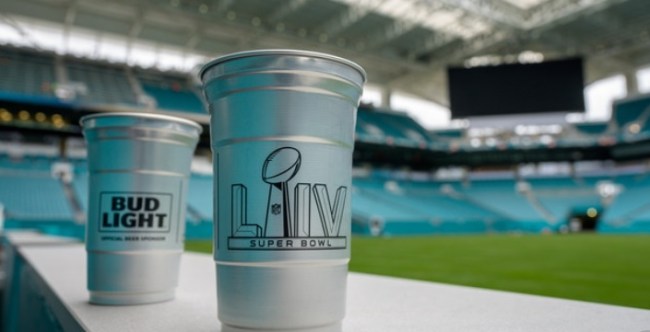 Fans attending Super Bowl LIV at Hard Rock Stadium in Miami will be served their ice cold beers from recyclable aluminum cups in an effort to phase out single-use plastics.

The Ball Corporation partnered with beer company Anheuser-Busch. and Centerplate, the company in charge of catering for Hard Rock stadium, and designed a lightweight aluminum cup that will bear the Bud Light and Super Bowl LIV logos.

“We’re proud to team up with Centerplate and Bud Light to bring fans at Hard Rock Stadium improved, sustainable hospitality with our game-changing and infinitely recyclable aluminum cup,” said John A. Hayes, Ball’s chairman, president and chief executive officer. “We developed the aluminum cup to ensure it meets growing demand for more green products, and we’re excited that our partnership will give this year’s Super Bowl fans the opportunity to do better by the environment.”

Ball will provide 50,000 20-ounce cups to clubs, suites and general concourse areas during the Super Bowl.

The aluminum cups will remain in use for other concerts and sporting events that take place at Hard Rock Stadium throughout the year.

According the Ball Company, the aluminum cups will eliminate more than 500,000 plastic cups annually from Hard Rock Stadium’s supply chain.