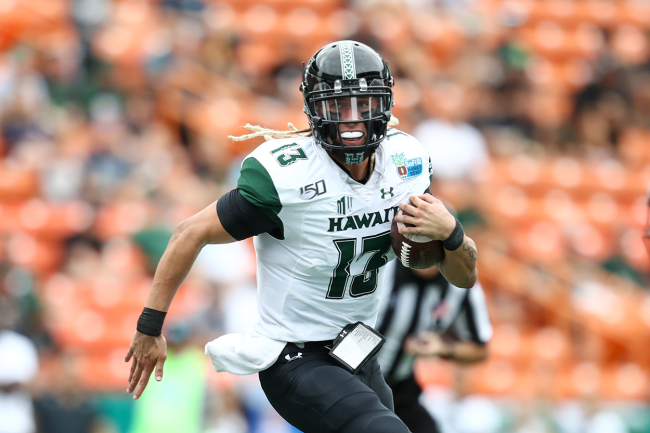 When Hawaii football takes the field against Vanderbilt on August 27th, it will look a lot different. Not only did the program hire former quarterback (and college football legend) Timmy Chang as its new head coach during the offseason, but the Rainbow Warriors will be rocking new lids.

Hawaii unveiled its new helmets this week and they are some of the best in the game. Not only do they look good, but they have an incredible backstory and an amazing connection to warrior culture.

Created and designed by Oahu’s Keola Rapozo, the helmets provide a chance to both educate and motivate.

“I would love for the connection to be about place and representation of identity. Our identity is exclusively tied to this place being kanaka, being local. To be able to share that same intimate idea and concept of ali’i and aarrior and the moa and their fierce competitiveness and how they fought on the battlefield,” Rapozo told KHON2. “This is the same representation that we hope that these kids are feeling when they’re out there. I’m a warrior and we’re going to go out into different parts of America and represent this place with our stories. I think that’s incredibly powerful.”

Here is the first look at Hawaii football’s new helmets:

‘I would love for the connection to be about place and representation of identity’ – @HawaiiFootball helmets to feature new look in 2022 by honoring #Hawaii’s warrior history https://t.co/j75HCIUyPg #HawaiiFB #GoBows 🤙🏽 @FITTED pic.twitter.com/WegZd8JKVW

During the creation process, Rapozo worked with Chang and multiple historians in an effort to tell a story and honor Hawaii’s past through the helmets. They turned out great.

Rapozo also offered an explanation for all of the minor details to KHON2. Each decal and feature has a specific meaning that can be traced back to Hawaiian warrior culture.

This will be the helmet sticker that is earned by making great plays. Much like Ohio State’s buckeyes.

“The Hulu Moa, which is the chicken feather, the merit based feather will be given out for exceeding expectations on the field. Tackles, touchdowns, however the coaching staff decides to hand these out. We decided to have two different colors: One for offense and one for defense.”

This is the crest.

“Manawa means time, but it’s also the space in between two times. We have the last generation of Warriors and then now we have Timmy and this new generation of warriors and we’re kind of in this middle part. We wanted to represent what a Warriors means to their chief.”

This is the state outline on the side of each helmet.

“It’s who these kids represent. Who they play for and where the support for them comes from. Although these are decals, it opens up the space to further tell our stories through these decals, maybe things in the future. It all ties into identity. We didn’t want to come in and change anything. We just wanted to add a layer onto the concept. So the design language is still very sharp. As it gradually grades, the feathers grade into the Manawa and the center it still carries that feel so it still works seamlessly with the current mark and current logo and current uniforms. That was important to us.”

Everything about Hawaii’s new helmets are awesome. They will be slightly more barren at the start of the season, but as players start to earn Hula Moas, they will become more full. Rapozo, the people that he worked with, and the university did everything right.