Hawaii Football Is So Problematic That Former Coach Who Lobbied To Return Turned Down Offer, Bashed School 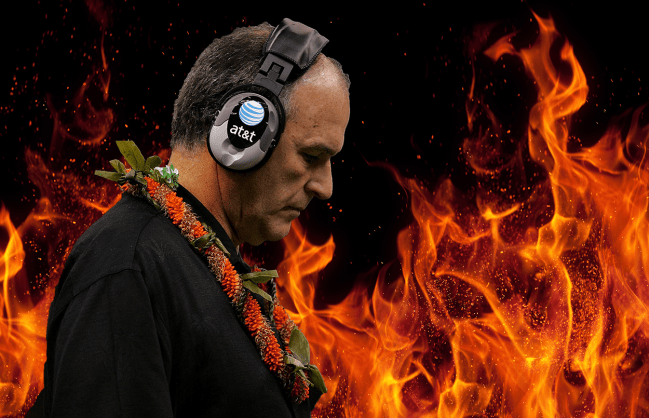 Things are not going well at the University of Hawaii. The Rainbow Warriors football team is in complete disarray and things only got worse over the weekend.

At the end of 2021, a report came out about the culture within the program. It detailed significant turmoil, but the majority of the problems were directed at then-head coach Todd Graham.

Players at the program went so far to say that he killed their love for the game. When the season came to a close, an insane amount of players entered the transfer portal, including Graham’s own son. It was a mass exodus that was caused by what players and their families labeled as abusive behavior from Graham.

A few weeks later, some Hawaii players, ex-players and their families spoke out in front of the state senate. Things got so bad that Graham was ripped to shreds in front of a governing body.

Despite the accusations and allegations, Graham continued to stand by his coaching practices and behaviors. He apologized to the people that he hurt and admitted that some things could have been done differently, but would not back down from his stance.

Meanwhile, Hawaii’s athletic director said that even if Graham’s buyout wasn’t a factor (it was), he would not fire him as head coach.

Well, he didn’t have to. On January 14th, Graham resigned from his post.

In turn, the school immediately began a coaching search.

Although the 2022 season is in the distance at this point of the year, time was of the essence. National Signing Day, when high schoolers decide on their college of choice, is coming up in a few weeks and not having a head coach can be a death sentence in terms of landing commitments.

The likely lack of commits comes on top of the players who have already left through the portal. Things are not going well.

As the school began to look for Graham’s replacement, one candidate began to emerge as the front-runner.

June Jones, who coached the team to a 76-41 record from 1999 to 2007, reached a New Year’s Six bowl game after going undefeated in the 2007 regular season. He became the winningest head coach in school history, but because of what he viewed as a lack of support from the university, he opted to leave.

15 years later, Jones openly lobbied to return to Honolulu. He wanted to be there and was excited about the idea of turning the program back around.

‘It’s a unique situation that I’ve done one time and I know I can do it again’ – Former University of Hawai’i head football coach June Jones says he is ‘interested’ in current vacancy following Todd Graham’s resignation last week. #GoBows #HawaiiFB pic.twitter.com/WYrC5CD8g3

The school was also on-board with the hire and offered Jones the job. He turned it down.

Jones proceeded to bash the school for their low-ball offer with ludicrous terms. Although he says that he remains interested in the job, “no coach in their right mind would accept” the offer he was given.

So I would like to comment and give my thoughts on the Football Head Coaching job..I am still interested in this job for the people of Hawaii but the job offered to me today there is no way I could accept with the conditions offered me …No coach in their right mind would accept!

Dictating who can be on my staff and only 2 year contract..What recruit would come if I was here for 2 years???..this has never been about money-but it is about giving me the ability to turn our program around and not have people tell me who is on my staff or how to coach my team

Here is what Jones said about Hawaii’s offer shortly after his comments online:

Yikes. Not only is this a bad look for outsiders, but this does not set Hawaii up for success in the immediate future.

With everything that is going on within the program, recruits are not going to want to play for the Rainbow Warriors. They are going to go elsewhere.

Hawaii football is in a complete tailspin and there is no telling when they will get things right.