Hawaii’s Football Coach Is So Disliked That A Crazy Amount Of Players Are Leaving, Even His Own Son 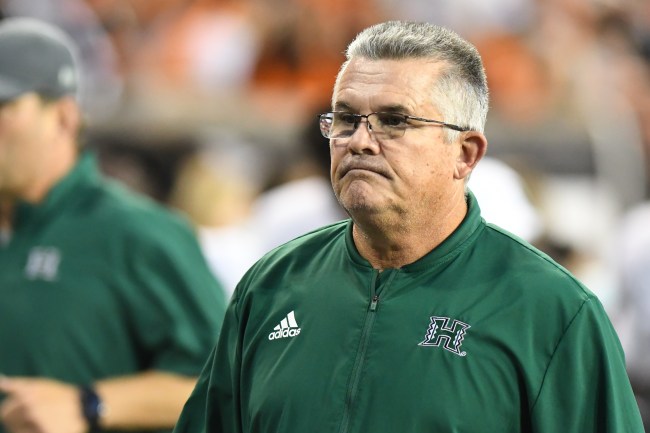 The University of Hawaii football is having a complete and utter crisis at the moment. Late last week, the Rainbow Warriors were scheduled to play the Memphis Tigers in the EasyPost Hawai’i Bowl, but COVID-19 issues within the host team’s program caused it to be cancelled.

Since then, 14 (!!) players have entered the transfer portal with more expected to join them. The mass exodus comes on the heels of a recent report that described the culture inside the program as “miserable.”

According to SF Gate, the players strongly dislike head coach Todd Graham. Graham was hired in 2020 and has apparently brought the program tumbling down in less than 24 months.

One current player told SF Gate: “A lot of players want him fired, especially the starters.”

Another said that he and a lot of others “can truthfully say Graham has killed (their) love and passion for football.

A third player went to so far as to say “it’s verbal abuse the way he talks to guys […] It’s personal. It’s not like, ‘oh, you need to be faster.’ He’s calling guys useless, jackass and a sack of shit.”

As a result, quite a few of the players on Hawaii’s roster will be playing elsewhere in 2022 unless Graham is let go. It is so bad that Graham and athletic director David Matlin both released statements.

It’s fine, everything is fine.

To really ice the proverbial cake, a recent decision makes it very clear just how disliked that Graham is amongst his players.

On Thursday afternoon, Graham’s own son entered the transfer portal. He was a freshman with the program in 2021 and only joined the team in the fall.

More than likely, Michael Graham was so uncomfortable staying with the program while his father is being bashed, that he got out. That’s really tough, especially for him, feeling like he had to transfer.

If coach Graham makes it through the offseason, it would be a shock. But, it is college football after all, and stranger things have happened.