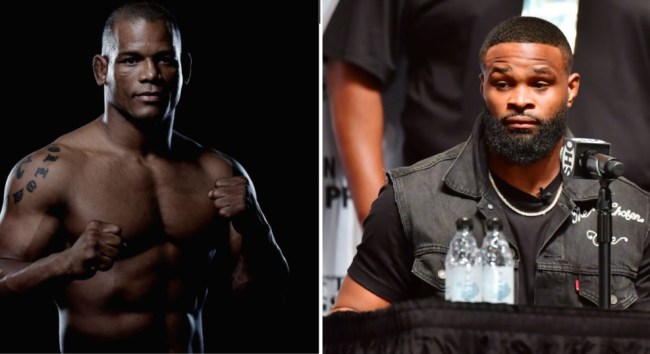 Hector Lombard has a bone to pick with Tyron Woodley.

While speaking with MMA Junkie’s John Morgan, Lombard said that he wanted to fight Woodley for not only trying to steal his girl but also attempting to steal other people’s girls too.

“I told you guys a long time ago, he’s a fake f*ck. He tried to pick up other people’s girls – not only mine, any girl that moved around, he tried to pick her up. Like, he feels that he deserves everything, and listen, it’s not about the girl because everybody, you know, when I made a post, everybody’s thinking about that I have feelings for the girl. No, I have feelings for the action of this clown that you think is your friend. You think like he can be your buddy, and here he is trying to get a hold of the girl.

“You know, he likes the smell of other people’s – I won’t say no more. But I do want the smoke.”

Earlier this year a heated Lombard confronted Woodley about trying to talk to his girlfriend while sitting ringside at a BKFC event..