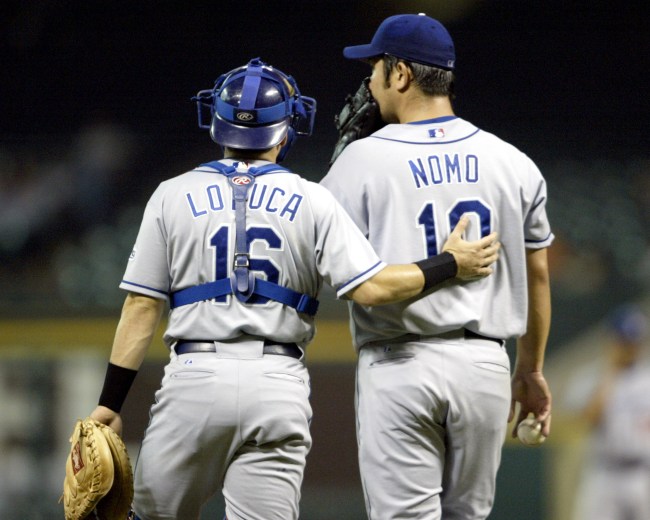 Hideo Nomo is probably best known for opening the door for Japanese baseball stars to come play in the Major Leagues, with the former right-handed pitcher winning the 1995 NL Rookie of the Year Award, and then going on to toss two no-hitters. Overall, Nomo’s MLB career spanned 12 seasons, with him finishing with a record of 123–109 and a 4.24 ERA — which isn’t too shabby.

While Nomo helped pave the path for his fellow Japanese ballplayers to come Stateside, as it turns out, he had other talents that many of us probably didn’t even know about. What was one of them? Chugging beers.

That’s according to Hideo Nomo’s former Los Angeles Dodgers teammate, Paul Lo Duca, who joined Action Network’s “The Favorites Podcast” to reveal an epic story about the pitcher’s drinking charades. Basically, Lo Duca once saw Nomo challenge the team’s trainer to a beer-drinking contest on a cross-country flight from L.A. to Philadelphia. Hideo Nomo proceeded to slam 35 beers — after the trainer passed out after 18 — and then, somehow, was awake, full-functioning and sober the next morning before 8 a.m. Talk about a legend.

Take a listen to the Hideo Nomo drinking story below.

Stop what you're doing.

You need to take 60 seconds and listen to former @Dodgers great @paulloduca16 tell a legendary baseball story to @BlackjackFletch pic.twitter.com/ViggAH91Jn

This is pretty unbelievable, guys. Sure, it’s not Wade Boggs, allegedly, throwing back 107 beers once in a day, but Hideo Nomo crushing 35 beers in a matter of about 4.5 hours is every bit as impressive. Actually, it’s probably even more impressive than Boggs’ feat knowing that Nomo was fine the next morning as if he hadn’t touched a drop of alcohol all night. Cooperstown should give Nomo an honorary plaque for this, because it’s amazing.

Sure, Hideo Nomo was a decent pitcher, but, man, he could have been a F’in legend had he decided to pursue a career in beer-chugging, because it sounds like nobody could have touched him in a competition.