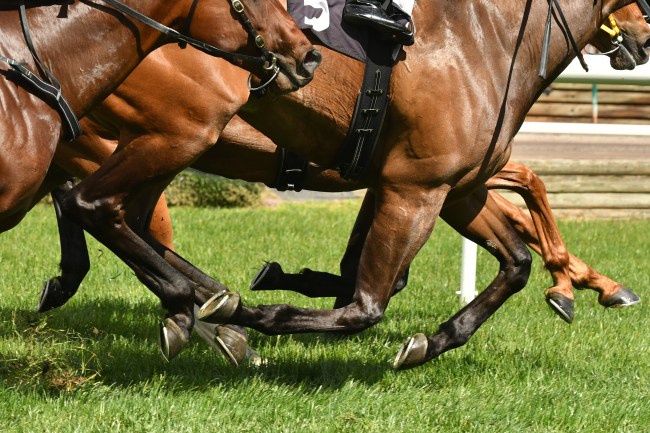 Christmas just got a little sweeter for 62-year-old Gregory McQueen from Tennessee who just cashed in big at the Del Mar Race Track in California last Sunday after turning $3 into $60K+.

He placed a $3 ‘Pick 5’ bet which required him to correctly choose the winner of five races, races 5 through 9, and when he’d won he actually had no idea how much money he’d taken home. In horse betting, this is different from a parlay and pays out a lot more.

McQueen’s been betting the ponies for the past 10+ years so it’s a bit shocking that he didn’t immediately realize how much money he’d won on a $3 bet but it makes this story that much better because he was actually home by the time he’d realized he’d won and had to go back to the race track after getting a phone call about his huge payment.

TwinSpires.com spokesman Ed DeRosa said the payout would’ve been $17,000 had McQueen simply parlayed the five winners together. But it was much higher because he entered the Pick 5.

“So that he got $60,000 is great,” DeRosa said.
When entering Pick 5s in the past, McQueen has limited himself to a five-horse $2.50 bet (50 cents per horse), but with time running out before the fifth race, he couldn’t decide between the No. 7 horse Snazzy Dresser and the No. 5 horse East Rand. So McQueen bet on both of them. Snazzy Dancer won, East Rand came in fifth.

His picks for the sixth race and ninth race were Kate’s Princess and Loomis, respectively, both ridden by jockey Joe Talamo.
In the seventh, he had Uni, who came back from deep in the race to win by a half length and in the eighth had Calexman. (via)

According to a report from Darren Rovell on the Action Network, there’s a new IRS rule which requires bettors to deduct taxes on any winning bets with odds of 5000-1 or greater. This means he had to withhold taxes on his $60,232 earnings from his $3 bet and took home a total of $45,752.95 after taxes.

That’s a pretty nice chunk of money to have in your bank account heading into the holidays, all from a $3 bet on the last day of the Fall season at the Del Mar Race Track. Is it weird that I can feel that gambling tick coursing through my veins right now? I feel the need to hit the sports book and get some action going.

You can read the full article HERE on the Action Network, which also has a sick app to track your bets, odds, and everything gambling related.