Houston Astros Reportedly In Signing A Star From A Rival 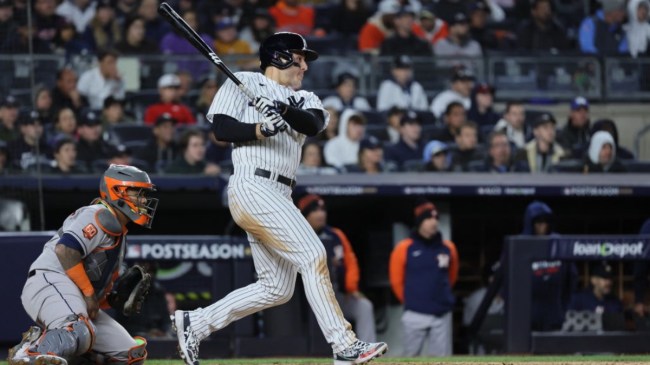 As the MLB heads into its offseason, there are some big names in New York that a lot of the league will have their eyes on in free agency.

Most baseball fans are focused on what the future holds for Aaron Judge and Jacob deGrom, but there is another star in New York who could also be hitting free agency.

Anthony Rizzo recently declined his player option with the New York Yankees for the 2023 season that would have been worth $16 million for the season. The Yankees have since made a qualifying offer of $19.65 million. Rizzo has until later today to make a decision on that offer. If he declines, he will head into free agency.

While he still has a few hours to accept that qualifying offer, he is already attracting interest from one of the league’s best teams. According to MLB Network’s Jon Morosi, the Houston Astros are interested in signing Rizzo.

The Astros have their eyes set on Anthony Rizzo 👀@jonmorosi joins the show with the latest on the World Series champs looking to bolster their lineup even more.#MLBNHotStove | #LevelUp pic.twitter.com/2LbbRyn65b

According to the report, Rizzo is the priority at 1st base for the defending champions as Yuli Gurriel hits free agency after spending his entire MLB career with the Astros.

Rizzo put together a solid 2022 season for the Yankees, hitting 32 home runs and driving in 75 runs. Rizzo would add another solid left-handed power option to a lineup that already gets plenty of power from that size of the plate from Yordan Alvarez.

It would also weaken a Yankees roster that the Astros already blew out in the postseason just last month.

After claiming an untainted World Series ring this season, it looks like the Astros are going to make some big moves this offseason to chase another.