LOOK: Houston Vs. ECU Was Delayed By 5+ Hours And Absolutely Nobody Went To The Game 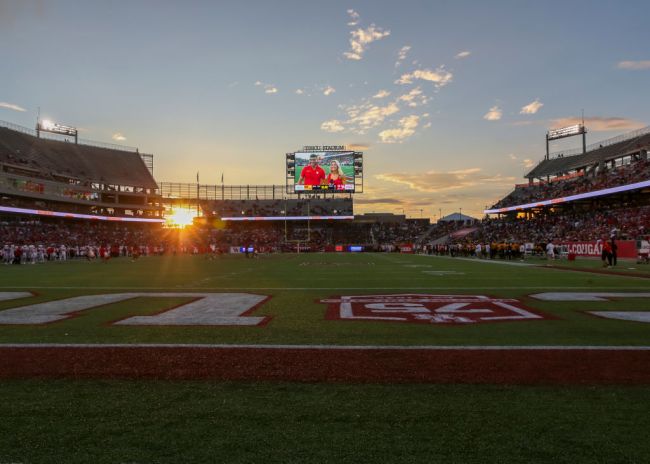 You can almost count the amount of people at tonight’s Houston vs. East Carolina football game on two hands. The game was played in Texas and was delayed by more than five hours due to weather.

Heavy rain, winds and lightning rolled through the area and continued to reset the clock 30-minute delay clock 10 times. The game was supposed to begin at 4:00pm ET and did not kick off until 9:20pm.

After five hours and 20 minutes, there was absolutely nobody in the stands. We’re talking less than 100.

It looked like only the band was at the game.

By my count, not including the band, I see 43 people in that photo. Double that number, ish. Yeah, about 100 people.

Can you blame them?

More than likely those fans were the one with fancy tickets that gave them access to an indoor tailgate. Being able to watch all of the games during the day on those giant screens with food and drink doesn’t sound like a bad deal.

Especially when you get to go out and watch your team play in a late game with a light evening slate.

The show must go on, but sheesh — 5+ hours is just brutal.