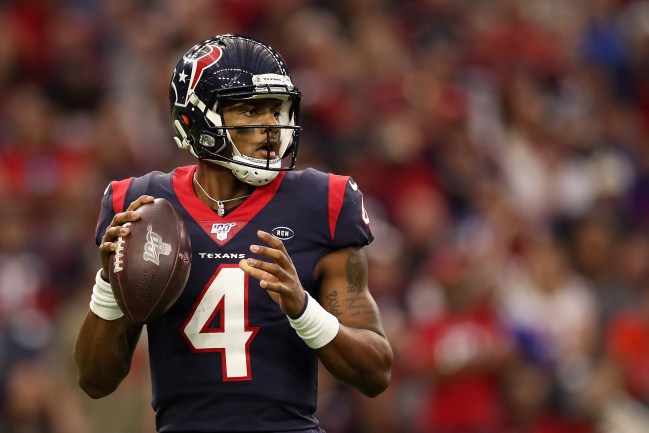 Things could get a bit awkward in Houston between the Texans and Deshaun Watson.

Earlier in the week, it was revealed that Watson had requested a trade from the team after a falling out with Texans owner Cal McNair.

Apparently, Watson is willing to “play hardball” and is threatening to sit out if he doesn’t get traded.

"Unfortunately, I hate to break it to the Texans fans, my sources have told me that Deshaun has requested a trade several weeks ago. He's made it clear he wants out of Houston." — @ShannonSharpe pic.twitter.com/jhrWfAX192

My sources have told me that Deshaun Watson has requested a trade. He requested a trade several weeks ago. He’s made it abundantly clear, I do not want to play for this organization, and what I was told he said I am willing to play hardball in order to get my way out of here.

On Friday morning, Texans GM Nick Caserio responded to Watson’s trade demand by reiterating that the team had “zero interest” in trading their franchise QB this offseason.

#Texans GM Nick Caserio: “I just want to reiteraten our commitment to Deshaun Watson. … We have zero interest in trading the player. We have a great plan and vision for him. We look forward to spending more time with him."

Nick Caserio pre-emptively on Watson: "Just want to reiterate our commitment to Deshaun Watson … we look forward to the opportunity to spend more time with him this spring when we get started, we have zero interest in trading the player." pic.twitter.com/aG3NgowDNq

#Texans coach David Culley, offering more on the Deshaun Watson situation: "The reason I'm in this position today is because I know he's going to be a Houston Texan.”

The strongest words yet.

If Watson refuses to play it could cost him $620k a week per game missed. It’s going to be real interesting to see who wins the staredown between the Texans and Watson this offseason.