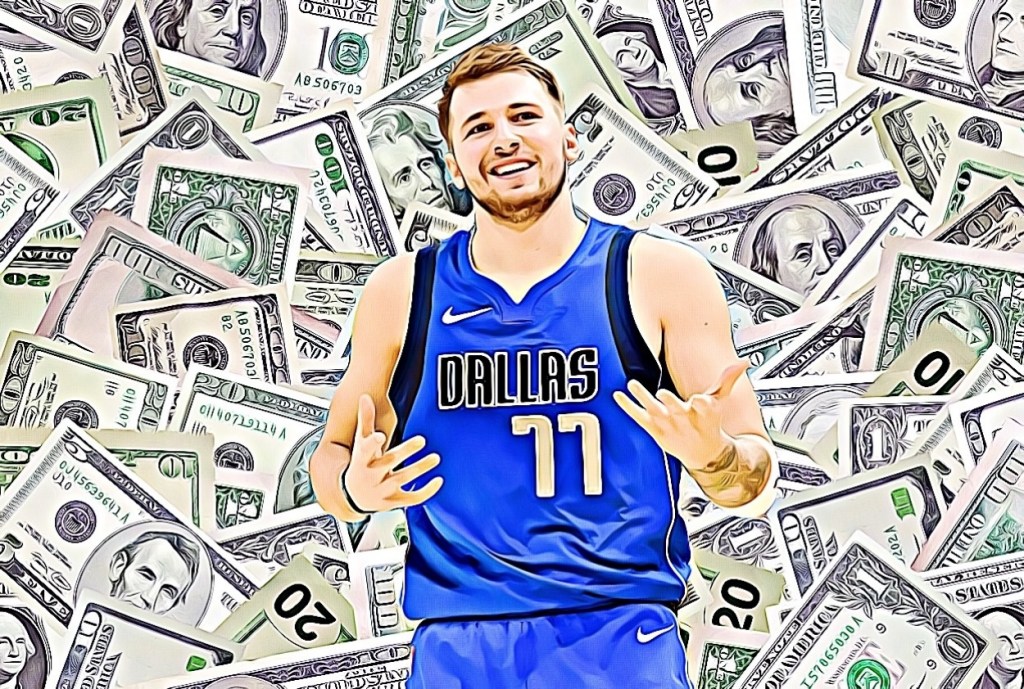 Slovenian point guard and Dallas Mavericks superstar Luka Doncic just signed a five-year NBA supermax contract extension worth $207,000,000. Normally, I’d say ‘$207 million’ but I felt that it was important to type out all of those zeroes to really drive the point home here.

Now, I’ll need you to suspend reality for a moment while we look at all of the things Luka Doncic can buy with the money from his new contract. This doesn’t include paying taxes on earnings or sales tax, it doesn’t include any of the money paid out to his agents and cost of living. It also doesn’t include the $32M he’s already earned. We’re looking at straight dollars from the supermax extension here and imagining all of the absolutely ridiculous things he can purchase with his new money.

This includes how many Top Golf franchises he can afford, how many beers and bottles of whiskey he can purchase in Slovenia, how many 50-gallon containers or lube he can buy on Amazon. I’ve really stretched my brain here to illustrate the outrageous spending power Luka Doncic now has after signing a $207 million contract extension.

How Rich Is Luka Doncic?

Let’s start with the food:

The entire population of Slovenia is 2.081 million and a single beer is Slovenia is $3 (USD). This means he could purchase 69,000,000 beers which are enough for 33.15 beers for EVERY SINGLE PERSON in his native country. And I don’t think he’s a smoker but if he was he could use his contract extension to purchase 42,073,170 packs of cigarettes ($4.92) which is also enough for just over 20 packs of cigs for every Slovenian citizen.

Luka Doncic makes his living on the court dribbling a ball. He could purchase approximately 1,224,852 Spalding NBA Game Balls ($169), the balls used in NBA games, if he wanted to fill an entire house full of basketball. And to that point, he could also purchase 592 homes in Dallas, Texas the median home price of $349,381.

If Luka wants to head home to his native Slovenia and fly commercial, he could purchase 188,181 one-way tickets in Coach and basically fly everyone in his zip code.

Doncic is a man of the people. Mavs fans love him and he loves them back. He could purchase 1,592,307 ‘LuKa Doncic’ jerseys at $130/each from the Dallas Mavericks shop and pass them out to fans.

If he wanted to expand his empire and make his money make money, Luka could afford 4,600 Taco Cabana franchises (a Dallas favorite) at a cost of $45,000 or he could purchase 11.5 Top Golf franchises at 18,000,000/franchise. Side note: I had no idea Top Golf franchises were that expensive but I’m also not surprised.

If he’s a fan of golf, Luka could purchase 69,000 tickets to The Masters on the secondary market where they have an average street value of $3,000. And if he’s a baseball guy he could buy 129,375 tickets to the Yankees Legend Suite, the most expensive seats in Yankee Stadium. Or maybe he’d rather buy 517,500 Michael Jordan autographed baseballs at $400/each on eBay.

On the off chance that Luka Doncic ever wanted to hold a lube wrestling night he could buy approximately 153,561 50-gallon containers of ‘Passion Lube’ on Amazon. And if Luka wanted to pay some of that $$$$$ back to Mavericks owner Mark Cuban he could purchase 82,800,000 ‘Scrub Daddy’ sponges on Amazon, one of the best-selling products in Shark Tank history.

I personally would LOVE IT if Luka Doncic hit up the new BroBible Shop where he could buy 1,971,428 Topographic Everyday Carry Wallets from The Ridge Wallet.

I personally wouldn’t spend my money this way, but if Luka Doncic wanted to he could afford 82,800 video messages from Caitlyn Jenner on Cameo ($2,500/each) or he could buy 345 of the infamous ‘Cat Meme’ NFTs ($600K) though that inherently defeats the purpose of NFTs.

So what I’m really trying to say here is that Luka Doncic is rich now. He’s really, really rich after signing his 5-year supermax contract extension for $207,000,000.