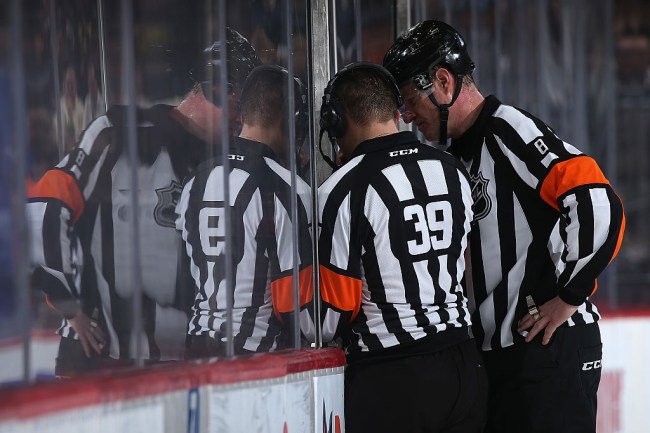 Bitching and moaning about your team getting screwed by the officials is a tradition as old as sports themselves, but in the past few decades, fans have been (at least somewhat) assuaged by the technology leagues have turned to in an attempt to address the fallibility of referees.

It’s hard to argue the advent of video replay hasn’t been an objectively good thing, and while blown calls haven’t been totally irradicated (and likely never will be), there’s not much of a downside to getting to review a play from seven different angles in super-super-slo-mo—at least in theory.

However, if you tune into hockey on a regular basis, then you likely know why I used “in theory” in that last sentence, as there’s one major area of concern the NHL needs to address sooner rather than later in the form of the offside challenge rule.

Last night, the Bruins took on the Canadiens in Montreal and Boston appeared to have mounted a comeback to take a 5-4 lead in the third period after Charlie Coyle netted a goal.

However, Claude Julien asserted Coyle was offside while entering the offensive zone and the game was put on hold as Toronto and the refs analyzed to footage before deciding this was indeed the case.

If you’re curious, here’s the best angle of the play.

Now, based on that picture, it would appear the refs ultimately made the right call. However, in doing so, they also illustrated just how broken the current system is.

In 2017, the NHL instituted a new rule that would ding teams with a two-minute minor for delay of game if their challenge failed, with Gary Bettman saying:

“The coach’s challenge was really intended to focus on glaring errors. And by imposing a two-minute penalty if you’re wrong, it should limit the number of challenges to those instances where there’s a glaring error.”

It seemed like a solid move, as the mere initiation of a review is a major momentum killer regardless of whether or not the goal is eventually upheld. However, as Bruce Cassidy noted after the game, the refs spent over three minutes trying to identify a “glaring error,” which tells you how glaring it really was.

So what’s the solution? The most obvious play here is to institute a cap on the amount of time a play can be reviewed—two minutes seems like a pretty reasonable span—as it shouldn’t take much longer than that to detect a “glaring” lapse in judgment.

This is far from the first time a goal has been called back over a matter of millimeters but that’s not the only issue with the NHL’s offside policy, which also neglects to take into account the amount of time spent inside the offensive zone.

Last night’s “goal” wasn’t the best illustration of this issue, as it only took the Bruins around seven seconds to score after Coyle crossed the red line. However, there have been a number of other instances where teams have had control of the puck for upwards of 30 seconds only to have a goal disallowed due to an initial offside that negated the entire play.

As a result, the NHL also needs to do something to address the spirit of the rule, which is to prevent teams from having an unfair disadvantage upon initial entry. A cap on time could also serve as a solution here but you could also think about “resetting” offside if the defensive team manages to get all of its players back before the goal is scored.

These suggestions are free, NHL. The next ones are going to cost you.