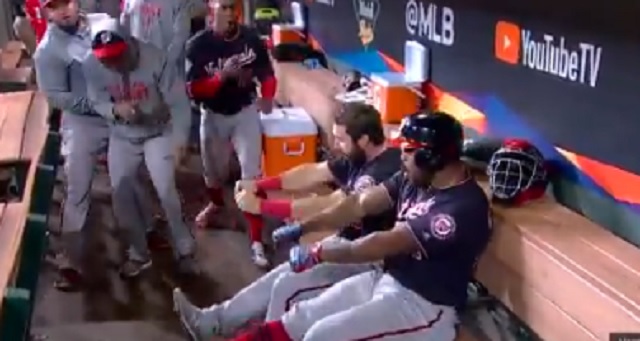 Howie Kendrick hit a huge two-run home run in the 7th inning of game 7 to put the Nats ahead 3-2.

HOWIE KENDRICK FOR THE LEAD 🔥 #WorldSeries

Howie Kendrick is just the 6th player in World Series history to hit a go-ahead HR in the 7th inning or later of Game 7.

At 36 years and 110 days old, he is also the 4th-oldest player to homer in any Game 7 of the World Series. pic.twitter.com/yG7LLeQBMu

After hitting the home run, Kendrick celebrated in the dugout with Adam Eaton in epic fashion by pretending to drive a race car on the bench.

Time to watch our favorite celebration of the #WorldSeries again. pic.twitter.com/YDZqaMqUZI

Apparently, Kendrick and Eaton were honoring their former driving instructor who recently passed away/ \\

Kendrick and Eaton celebrate home runs by pretending to drive a driving instructor’s car because they both had the same driving instructor, who passed away in June during a driving lesson. Beautiful way to honor someone who was important to them growing up. pic.twitter.com/7y1LY9pONg