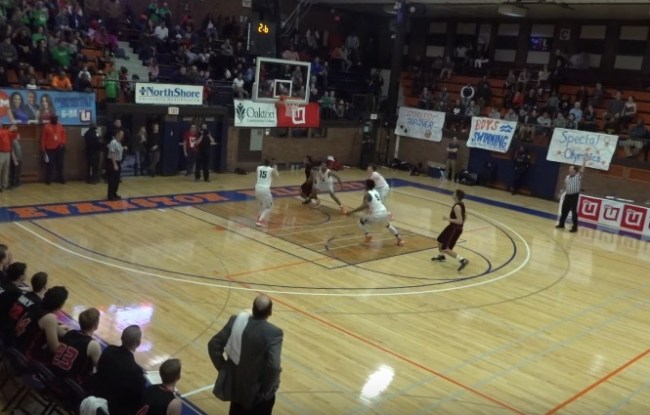 Did you ever get the chance to hit the game-winning shot and experience the crowd going absolutely nuts while celebrating your accomplishment? Nah? Well, you can live vicariously through this H.S. freshman who is walking the hallways as a god this week after nailing a 3/4 court buzzer beater to win the game for his team with a score of 45-44.

Blake Peters is a freshman at Evanston Township High School and he got the ball as time expired with his team down by 2. He did the only thing that could win the game. He got the ball, turned, and launched it three-quarters of the way down the court and into the net as time ran out. Watch Blake nail the shot to beat Maine South and the crowd goes absolutely nuts in this awesome clip which later made the SportsCenter ‘Top 10’ plays:

Even though he’s just a freshman, Blake Peters instantly became a folk hero legend at Evanston Township High School. He told the Chicago Tribune “I was on such an emotional high. I started running and all my teammates tackled me.” Apparently, the celebration was so rowdy that Blake lost the glasses he uses to play basketball while everyone went nuts. He later found them in the locker room with a teammate wearing them.

You can read a full play-by-play of what led up to this three-quarter court game-winning buzzer-beater over on the Chicago Tribune and I’d actually suggest giving it a read because it’s pretty riveting stuff.