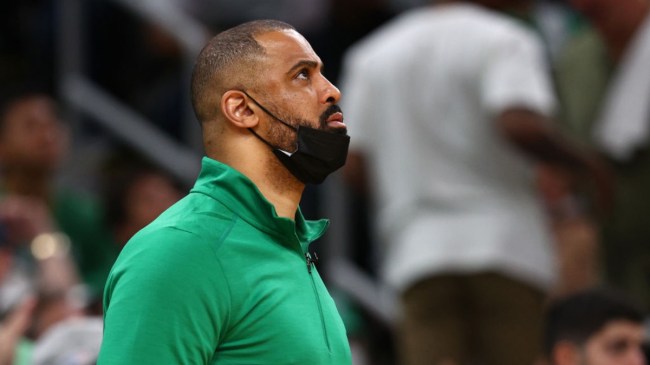 The basketball news was hit with some shocking news last week when a report surfaced that the Boston Celtics were planning to suspend Ime Udoka for the entirety of the 2022-23 NBA season.

Fans later learned that it was because of an alleged affair with a member of the Boston Celtics staff. Since then, there has been plenty of speculation about the situation and what Udoka’s future may hold.

Today, ESPN learned some more details about the situation. According to Adrian Wojnarowski, Udoka used crude language while speaking to a female subordinate, which impacted the Celtics’ decision to suspend him.

ESPN Sources: The law firm probe into Celtics coach Ime Udoka found crude language in his dialogue w/ a female subordinate prior to start of an improper workplace relationship, an element that significantly factored into severity of a one-year suspension: https://t.co/vjRArDWGZR

The independent law firm probe into Boston Celtics coach Ime Udoka found that he used crude language in his dialogue with a female subordinate prior to the start of an improper workplace relationship with the woman, an element that significantly factored into the severity of his one-year suspension, sources told ESPN on Friday.

Those investigative findings — which described verbiage on Udoka’s part that was deemed especially concerning coming from a workplace superior — contribute to what is likely a difficult pathway back to his reinstatement as Celtics coach in 2023, sources told ESPN.

The source who revealed these new findings about the Udoka situation also revealed that it is going to make it difficult for Udoka to be reinstated as the coach of the Celtics after this suspension is over.

It was just 3 months ago that Udoka led the Celtics to the NBA Finals in his 2nd season as a head coach and now there’s a possibility he isn’t even an NBA coach just a year later.