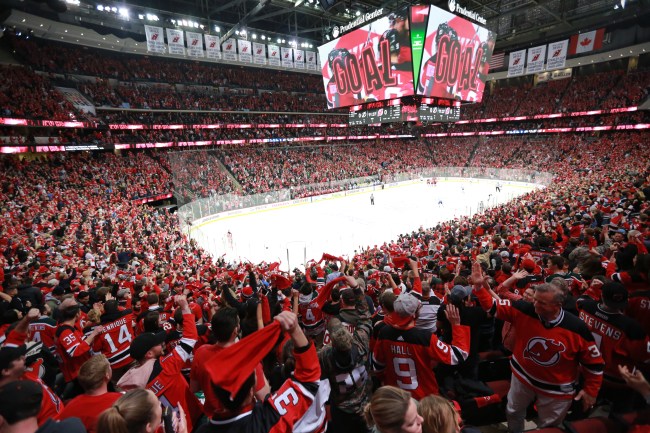 The Prudential Center in Newark, New Jersey is among the marquee sporting arenas in the world (ranked #8th – Billboard Magazine). During the 1st intermission at Wednesday night’s Game 4, JohnWallStreet had a chance to discuss the advantage/drawbacks of the arena’s proximity to NYC and the importance of playoff hockey for the team and the building’s profitability with Adam Davis, CRO of the New Jersey Devils and Prudential Center (properties within the Harris Blitzer Sports & Entertainment portfolio, which also includes the Philadelphia 76ers, Team Dignitas esports franchise and more.)

JWS: Since the Nets moved to Brooklyn, the Devils placed an added emphasis on being “New Jersey’s team.” How has that mentality impacted corporate sponsorships?

Adam: When Josh Harris and David Blitzer bought the team in August of 2013, we looked at it through the lens of this (Prudential Center) being the “Home of the Devils”; we wanted to transition it, to becoming the “Home of Entertainment for New Jersey.” That is also the filter we looked at partnerships through. When we got here we had a lot of great partners, but not ones that were necessarily representative of New Jersey. Fast forward to today and all the brands are representative of Jersey in some way. It could be a global brand like Anheuser Busch who happens to have a brewery in Newark N.J., a brand like Mars chocolates who is headquartered in Hackettstown, N.J. (moving to Newark in 2 years) or a partner like Investors Bank; the largest bank headquartered in New Jersey. Plymouth Rock Insurance, a huge auto insurance company in New Jersey. RWJ Barnabas Health, the largest healthcare system in the state of New Jersey. WaWa, a big convenience store; are all partners. Then, global brands that have a big presence in the state. Enterprise, this is the biggest market for them. Infinity, New Jersey is arguably the number 1 or 2 market in the country for them. So, everything we look at goes through that filter of New Jersey.

JWS: Is it an advantage to be located so close to NYC or does having MSG and Barclays Center in such close proximity hurt Prudential Center business?

Adam: Both. When I got here, the Prudential Center was trying to be positioned as New York City. As opposed to being the last option in New York, our perspective was “why not be the first option in New Jersey”. That mentality has helped to enhance the content. When we got here, this building was 17th in the country (Billboard Magazine) for entertainment venues. Today we are number 6 in the country, 8th in the world. We’ll do 45 concerts this year. We do more concerts than Devils games, it’s amazing.

Adam: There is no debate that post season play brings an unparalleled energy to the arena, the team and the city of Newark. Obviously, playoff games generate additional ticket sales, partnerships, premium, merchandise, food & beverage; people spend more on food & beverage and merchandise because everyone is really excited, really happy and wants to represent their team. But this has truly been a banner year for the arena. We celebrated our 10th Anniversary, installed the largest in-arena scoreboard in the world with partner Trans-Lux, opened the GRAMMY Museum Experience Prudential Center and welcomed over 150,000 patrons through our doors each month. The playoffs generate momentum for Season Ticket Members in the 2018-2019 season, but outside of Devils game, we still anticipate over one million concert and special event attendees in the coming year.

Fan Marino: The Prudential Center proudly owns the world’s largest, in-arena, center hung, digital scoreboard. The screen (9,584 sf) is 86% larger than the next largest scoreboard (5,138 sf, Red Wings) in the league, has over 8 million more LEDs than the scoreboard at AT&T Stadium (Cowboys) and is big enough to fit 2 Madison Square Garden scoreboards inside. Remarkably, players on the screen appear to be 4x larger than they are. You can check it out, here!

Fubo TV has announced it has closed on a $75 million Series D round, increasing the total amount that the company has raised to $150 million; including a $55 million Series C round in June ’17. The sports-centric digital TV service will use the newly raised capital to expand its engineering and product teams (plans to double staff, open 2nd office by end of ’18), increase its marketing budget and acquire additional content rights. Launched in 2015, the live TV streaming platform has found a niche targeting sports fans (offering 30,000 sporting events/year); surpassing 100,000 subscribers in September 2017. While impressive, the company still lags far behind Sling TV (2.2 million) and DirecTV Now (1.2 million) in terms of market share.

Howie Long-Short: Existing shareholders (and TV programmers) 21st Century Fox (FOXA), Sky (SKYAY) and Scripps Networks Interactive (DISCK) all exercised their pro-rata rights, participating in the latest round; while AMC Networks (AMCX) invested in the company for the first time. While it appears to be an ill fit on the surface, Fubo TV isn’t the only web TV provider that TV programmers have invested in. The Walt Disney Co., pending final approval of its 21st Century Fox acquisition, controls 60% of Hulu; Comcast owns 30% and Time Warner owns 10%. It’s also worth pointing out that A&E, Discovery Communications, AMC and Viacom are invested in Philo.

Fubo TV’s business model is predicated on both recurring monthly subscription fees and ad sales. Despite having just launched “server side ad insertion” in January, ad sales represent a “low single-digit percentage” of total revenue. The company is expecting an overall revenue run rate of $100 million within 12 months.

Fan Marino: Fubo TV’s $45/mo. package, marketed as “a real sports package, for the real sports fan”, contains 85 channels; a collection of local TV networks (think: ABC, CBS, FOX), national cable networks (think: FS1, NFL Network), RSNs (think: MSG, YES, NESN) and difficult to find conference networks (think: Big 10 Network, Pac-12 Network). The bundle includes more sports channels than any other competitor, but lacks the most valuable (to a sports fan) national cable network; ESPN. Is ESPN (and ESPN2) worth the additional +/- $55/mo. required to retain your cable bundle? Probably not, but I’m not signing up for an OTT service without it.