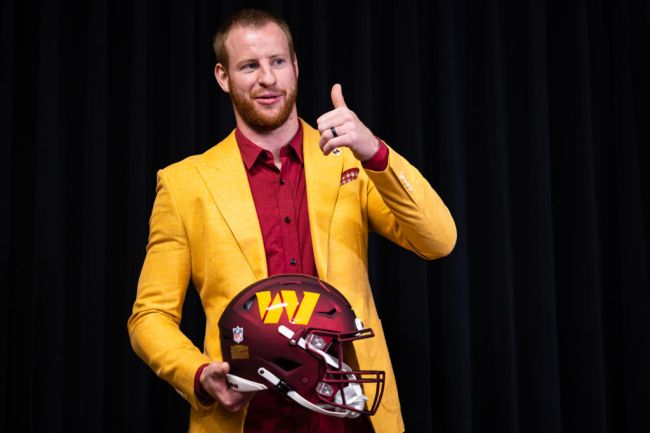 This offseason has been a tough one for Carson Wentz. After a week 18 loss to the Jacksonville Jaguars eliminated the Indianapolis Colts from playoff contention, sentiment on Wentz quickly turned sour.

First the Colts’ GM and head coach wouldn’t endorse Wentz as their starter for next season. That was followed by rumors that the Colts would look to get rid of Wentz this offseason. After plenty of drama, Wentz was finally dealt to the Washington Commanders just a year after the Colts acquired him.

After the trade, some unflattering rumors came out about Wentz’s attitude and leadership. Now, one of his former teammates has come out with a different take on the situation.

On Friday night, Jonathan Taylor accepted the Bert Bell Award as the NFL’s Player of the Year. During a press conference at the event, Taylor spoke about Wentz and told reporters that he was sad to see his former QB go.

It’s not necessarily surprising to hear Taylor express support for Wentz. Taylor just had an unbelievable year with him at the helm. It’s also not surprising with the question marks at quarterback that have arisen since the trade. Right now, the Colts don’t have a viable starter and that is sure to impact Taylor’s numbers next season.

Last year, Taylor posted 1811 yards rushing, 360 yards receiving, and 20 total touchdowns. Those numbers are sure to drop if the Colts have Sam Ehlinger starting at quarterback.

The Indianapolis Colts might have decided Wentz was blame for last season’s failures and many don’t believe in him as the starter for the Commanders, but it seems that one of the league’s best offensive players still believes he was an asset last season.